Engineering doctoral student Li Yan was awarded for his research that could make mobile browsing faster and more energy efficient. 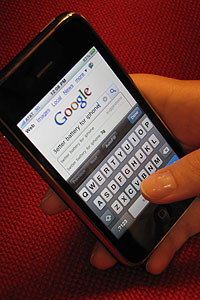 Yan's findings have the potential to significantly lower both the peak and average power consumption in 4G devices.

A doctoral student from the Edward E. Whitacre Jr. College of Engineering was awarded “Best Student Paper Award” at a Paris conference.

Li Yan, a doctoral student in the Department of Electrical and Computer Engineering, won the award at the 2010 Institute Electrical and Electronics Engineers’ International Symposium on Circuits and Systems conference (IEEE ISCAS 2010), where 2,058 hopeful students from around the world submitted papers that were reviewed and scrutinized. Yan won for his paper “Efficiency Enhancement and Linearity Trade-Off for Cascode vs. Common-Emitter SiGe Power Amplifiers in WiMAX Polar Transmitters.”

Yan said the highly integrated radio frequency polar transmitter research in Lie’s lab can potentially lower both the peak and average power consumption in 4G mobile handsets and portable electronics, such as iPads and iPhones by a factor of two to 10, considerably increasing battery operating time and improving energy efficiency for all mobile wireless devices.

“I also want to express appreciation to another fellow doctoral student and a key co-author of the paper, Jerry Lopez, in Dr. Lie’s group,” Yan said, “as well as the external sponsored research support from the Industrial Technology Research Institute in Taiwan.”

The Heart of the Matter: Professor Awarded NIH Funds