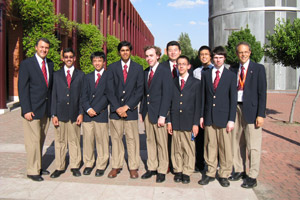 In the journey to IMO, Razvan's trainees have competed in three contests among the world's most mathematically gifted high school students. Click to enlarge photo.

As a professor prepares his mind and packs his suitcase, he thinks back to when he won the international gold in 1985.

This summer, Razvan Gelca, associate professor of mathematics, will not train athletes. The former mathlete will train the best high school math students in the world for the International Mathematical Olympiad (IMO).

“The most challenging part about being a coach is that these students are so good that you have to find a way to be up to their level,” Gelca said. “I have to find problems they haven’t seen before.”

As a former gold medal winner, these trainings challenge Gelca’s mathematically oriented mind. Students must train daily to win medals, he said. Complex mathematic problems challenge coaches and test their abilities on whether or not they could compete in the IMO.

Gelca’s trainees have completed a long mathematic journey. Those who qualified for the IMO have competed in three contests against the best mathematically gifted high school students on the planet. This July, the top-six scorers will inevitably face fate and find out who will be this year’s gold medal winner.

To help students compete at an international level, Gelca uses a three-pronged system that engages students in an interactive environment. His use of training books and lectures sparks new problem-solving ideas among students. It helps that Gelca is bilingual and can seek problems students have never been exposed to.

“It’s one of the first books to be a path opener for new lines of problems and ideas,” Gelca said. “It is a leading book in the field.”

Po-Shen Loh, deputy team leader for the United States team at the IMO, was coached by Gelca more than ten years ago and said Gelca’s coaching techniques are effective.

“I found Razvan to be an inspiring teacher who clearly was very interested in what he was teaching,” Loh said. “I seem to remember that the subject he taught most was geometry, and since I enjoyed his teaching, I chose to study geometry more myself. I don't remember him being particularly hard in a pushy sense, but rather as an encouraging person who preferred to let his passion inspire others to succeed.”