Brian Quinn will be honored for a superior record of scholarship and professional service during his 15-year career. 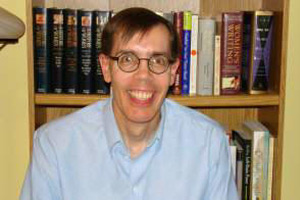 Quinn, who has been a subject librarian at Texas Tech since 1995, will receive his APA award on June 26.

The award, in its fourth year, recognizes outstanding contributions to psychology and behavioral sciences in areas including instruction, project development, publications, research or service.

The APA’s award committee noted Quinn’s “excellent record of scholarship and extraordinary and proactive professional service” as keys to its decision.

A subject librarian at Texas Tech since 1995, Quinn described the honor as the pinnacle of 15 years of service and research, which focuses primarily on the psychological and sociological aspects of libraries; for example, studying how people seek out and evaluate information.

“For me, receiving this award is probably the most exciting thing that could happen in my career,” he said. “It is a national award from what many people feel is the premier professional organization in the field. For a social sciences librarian, I can’t think of many accomplishments as important as winning this award.”

Quinn will be honored June 26 at the Education & Behavioral Sciences Section Research Forum of the American Library Association Annual Conference in Washington, D.C.