Tom Stalcup, a production volunteer for more than 14 years, was given a Distinguished Service Award by the National Friends of Public Broadcasting. 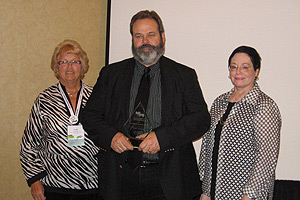 During his years with KTXT-TV, Stalcup has served as a camera operator, floor director and volunteer recruiter for the station's pledge drives. Photo courtesy of KTXT-TV.

For more than 14 years, Stalcup has volunteered as camera operator, floor director and volunteer recruiter for KTXT-TV’s pledge drives. He also donated his time and money to other KTXT-TV productions such as “StoryTellers and MusicMakers,” “Jesse ‘Guitar’ Taylor” and “Jay Boy Adams, 20 Years Later.”

Stalcup is the program coordinator for the Video Production Technology program at South Plains College in Levelland.

How Safe is the Internet?