The nonwoven cotton absorbent wipe would be a perfect remediation tool for use by oil spill cleaning crews. 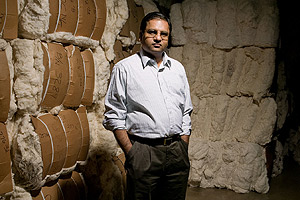 Developed by Ramkumar, environmentally friendly Fibertect® can absorb oil up to 15 times its weight and is a biodegradable technology.

A preliminary test of Fibertect® on the soiled beaches of Grand Isle, La., has proven it successful at picking up the oily paste washing ashore at beaches and marshes across the Gulf State region.

Not only did it clean up the rust-colored crude oil, but also it adsorbed toxic polycyclic aromatic hydrocarbon vapors reportedly sickening oil spill clean-up crew members.

“It definitely has proven itself a perfect product for cleaning up the oil spill,” Ramkumar said. “This preliminary test in Louisiana has shown that our wipe material is unique from others in that it easily absorbs liquids, and it has vapor-holding capacity. This will help workers clean beaches and stay safe at the same time.”

Ramkumar said his latest research shows raw cotton-carbon Fibertect® can absorb oil up to 15 times its weight. Unlike synthetic materials like polypropylene that are currently used in many oil containment booms, Fibertect® is made from environmentally friendly raw cotton and carbon.

Amit Kapoor is president of First Line Technology, which distributes Fibertect® commercially. Though the product has been tested in the lab with raw crude and motor oil, he said the company wanted to field-test the product.

Earlier this week, he sent a sales representative, who also works as an independent contractor for BP, to one of the worst-hit areas.

“We wanted to test the effectiveness of Fibertect® on the crude oil for beach cleanup,” Kapoor said. “Fibertect® was taken to the empty beaches of Grand Isle, and then laid out on top of a blob of oil that had settled on the beach. It worked very well in absorbing and containing the oil. The glob stuck to the Fibertect® and did not release from the material.”

Though Kapoor said he had seen Fibertect® pick up similar material with a pasty consistency, such as petroleum jelly, the results shocked the sales representative sent to run the experiment.

“Our representative was shocked because he hadn’t seen a product work like that with the speed or the effectiveness,” Kapoor said. “He showed many other contractors that were working on the beach and they were impressed as well.”

Watch the Fibertect® Wipe in Action

Ron Kendall, director of TIEHH, demonstrates how Texas Tech-made Fibertect could help clean up oil in the Gulf. Read more >>

Fibertect® was approved for use as a sorbent by the U.S. Environmental Protection Agency, Ramkumar said. The product already has proven that it can also adsorb toxic fumes associated with chemical remediation, he said. Evaluation by Lawrence Livermore National Laboratory found that it can retain offgassing mustard vapors efficiently and does not shed loose particles.

Originally developed to protect the U.S. military from chemical and biological warfare agents, Fibertect® contains a fibrous activated carbon center that is sandwiched between layers.

The top and bottom layers, made from raw cotton, can absorb oil while the center layer holds volatile compounds such as the polycyclic aromatic hydrocarbons, or blistering agents such as mustard vapors or other toxic chemicals.

“Fibertect® already has proven to be effective in the bulk decontamination of chemical warfare agents and toxic industrial chemicals, but our proposal here is to use it to aid in the clean-up efforts in the Gulf,” Kapoor said. “Fibertect® allows for a green, environmentally safe, biodegradable technology that is perfect for the expanding effort to protect and decontaminate coastal lands and wildlife. We welcome the opportunity to work with the government, BP or anyone else in a joint effort to defend and preserve our planet.”