From Red to Blue: Professor Explores Political Shifts in Texas 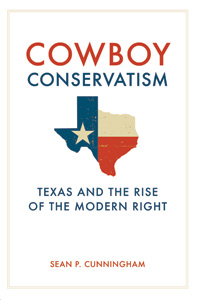 According to Cunningham, campaign tactics and unforeseen factors could cause another political shift similar to the 1960s and 1970s.

As the Texas gubernatorial election approaches, Gov. Rick Perry thinks he is a shoo-in, but a Texas Tech professor said the red-state tide may be washed over by a blue wave.

“Cowboy Conservatism: Texas and the Rise of the Modern Right” explains the process of political shifts. Multiple elements play a role in shifts among parties, said author Sean Cunningham, and it can be hard to decipher causes because politics are not black and white. Also, it focuses on Texas politics in the 1960s and 1970s and the change from the Democratic Party to the Republican Party.

“There are many different themes throughout the book,” Cunningham said. “Aside from Texas politics, a predominant theme is the role of public relations and political marketing in politics.”

While similar books interpret intraparty friction, Cunningham’s book goes beyond party rivalries to explain how political parties position themselves in the minds of voters.

On November 22, 1963, the U.S. faced tragedy with the assassination of John F. Kennedy. Loyally Democratic Texans felt obligated to support successor Lyndon B. Johnson because he was a Texan and Kennedy died in Texas, Cunningham said.

Texans had a change of heart in the 1972 presidential election and abandoned Democratic candidate George McGovern. He was perceived as the choice of the far-left wing and, as a result, lost the election.

“Many factors played an important role in this shift,” Cunningham said, “including loyalties and traditions. People no longer felt compelled to cast their votes based solely on partisan loyalty.”

Future results of the gubernatorial election are difficult to predict, he said. Since the 1990s, Texans have primarily voted Republican. But, unforeseen factors and successful campaigning can cause another shift.

“Cowboy Conservatism: Texas and the Rise of the Modern Right” is scheduled for release in June.