The electrical engineering team will see their designs birthed in a microfabrication facility. 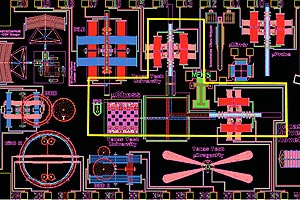 The winning chess board design is modeled after traditional chess figures and its pieces are moved by microrobotic arms. Click to enlarge image.

The world’s smallest chess board, about the diameter of four human hairs and designed by Texas Tech engineering students, was a winner in this year’s design contest for novel microelectromechanical systems (MEMS), held at Sandia National Laboratories.

A pea-sized microbarbershop, designed by students at the University of Utah, was the winner of the educational MEMS.

Kings of the Microworld

The micro chess board comes with micropieces scored with the design of traditional chess figures. Each piece is outfitted with even tinier stubs that allow a microrobotic arm to move them from square to square. Space along the side of the board is available to hold captured pieces.

This year’s contest participants also included the Air Force Institute of Technology, the universities of Oklahoma and New Mexico and the Central New Mexico Community College.

The contest, open to institutional members of the Sandia-led MEMS University Alliance program, provides an arena for the nation’s student engineers to hone their skills in designing and using microdevices. Such devices are used to probe biological cells, arrange and operate components of telecommunications and high-tech machinery and operate many home devices.

The contest helps develop a sense of the maximum and minimum displacement of a micro object, the amount of force needed to move it and the degrees of freedom needed for a part to accomplish its preset task.

The Heart of the Matter: Professor Awarded NIH Funds