A ribbon cutting ceremony for the 11,400 square-foot Peggy and Bill Dean expansion of the Merket Alumni Center will be held June 19. 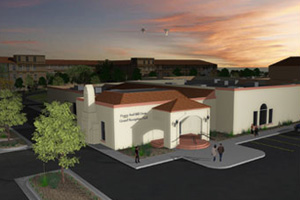 The $4 million expansion project includes a new entrance, a reception hall and doubles the available meeting space in the Merket Alumni Center.

A two-and-half-year fund raising and construction project doubling the meeting space in Merket Alumni Center will culminate from 11:30 a.m. to 1 p.m. Saturday (June 19) during an open house and ribbon cutting inside the facility at 17th & University Avenue.

The public is invited to attend the event that will showcase the 11,400 square-foot addition. Attendees are encouraged to dress casually and to wear red and black. Commemorative scissors with the date of the event will be given to guests while supplies last.

The interior portion of the project is substantially complete and began hosting events on June 4. During the construction, a new, west-end entrance into Merket Alumni Center was built that opens into the Peggy and Bill Dean Grand Reception Hall. The hall includes a cast stone fireplace and reception and serving bar, as well as elegant furnishings. A commissioned portrait by Paul Milosevich of long-time mass communications professor and TTAA Executive Vice President and CEO Bill Dean and his wife, Peggy, is a prominent feature of the hall.

Named for the Deans, the hall and the capital campaign to expand Merket Alumni Center were ideas of the Isom family and the Ben Ralston family, who made the lead gift in February 2008. Rex Isom was president of the national board of directors of TTAA at the time and has served as chair of the expansion project committee.

An honor wall including the names of donors of $1,000 or more to the project is also featured in the reception hall. The project committee commissioned Charise Adams of Edible Metals to create the unique wall sculpture, which is a metal and laser-etched glass rendering of the TTAA masked rider logo.

In addition to the reception hall, three new banquet/meeting rooms were constructed on the west end of the building and are named for State Sen. Robert Duncan, the Wick Alexander family and PlainsCapital Bank. These three rooms, when combined with the Chancellor Kent Hance Room, the Bob Herd Room and the Dan Law Room create the 7,500 square-foot McKenzie Ballroom with dinner seating up to 480 and theatre seating up to 700.

With more than $3.1 million of the $4 million project budget pledged, a number of naming opportunities remain available for donors, as well as brick pavers, bronze markers, marble pavers and granite benches for varying giving levels.

For more details visit the expansion website, or contact Jim Douglass at (806) 742-3641 and Renée Underwood, Texas Tech Alumni Association National Board member and marketing chairman for Building on Tradition Capital Campaign at (806) 928-0463.

Gardens Are More Than Just a Job for Alumna