Two mass communications students show through their award-winning video what accountability means to them. 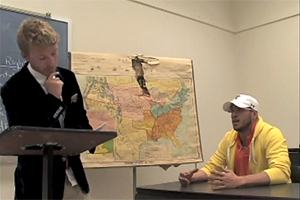 The guy with the mustache isn’t happy. He’s standing over you, rigid with authority and pinch-lipped indignation, holding a stack of papers with fat red Fs marked on them.

You? You’re slumped over the table, trying to look cool. Nonchalant. Confessing nothing, hoping that this too shall pass.

You’re out of excuses. So you try throwing out the sympathy card.

“But I’ll lose my scholarship.”

And what do you hope to gain? Some transient benefit – another class under your belt – and yet, in the long run, what lesson have you really learned? That rules are flexible? That pity can sometimes balance the levy of blood, sweat and tears?

And what then? What happens when you’re staring down the barrel of even bigger, scarier guns? What do you stand to lose? Your car? Your job? Your family?

Who throws you a rope when the tatters of your life are sinking around you?

Those are exactly the kind of questions that Texas Tech students Nathan Milles and Erick Stow ask you to consider in their latest collaboration.

Their video, Accountability … It Starts Here, beat out 15 other entries to win the Spring 2010 Matador Ethics Video Challenge.

Entries for the contest, hosted by the Ethics Center/Quality Enhancement Plan to bring attention to Texas Tech’s Statement of Academic Integrity, covered the gamut from respect to intellectual honesty.

Yet in this era of finger pointing and blame ducking, a quick reminder of what’s at stake for those who don’t own up to their actions may be in order. And clocking in at a lean 43 seconds, Milles and Stow’s video is indeed a quick reminder.

So where did the idea come from? Stow, a senior mass communications major from Saskatoon, Saskatchewan, Canada, says he originally wanted to do a piece on free thought, but Milles was set on accountability.

So a few days later, Stow sat down at the Leisure Pool. He put on his headphones, cranked some opera on the iPod, and the ideas, he says, just started to flow.

“It made me think of some things in my life that I wasn’t holding myself accountable for, and that’s where it came from.”

That’s exactly what Milles was hoping for when he approached Stow. The two knew each other. They’d taken some advertising classes together, collaborated on some projects.

“I thought of Eric as a go-getter, kind of an entrepreneur,” says Milles, a junior mass communications major from Flower Mound.

Milles had dabbled in video before – nothing serious, really, just recordings of his friends. The kind of stuff you do when you’re bored and messing around. But he saw the Matador Video Challenge and thought it might give he and Stow the video production experience they both craved.

“I thought it was a good opportunity for us to go out and take the reins on something that wasn’t necessarily mandatory for graduation.”

A five-judge panel comprised mostly of students selected the winning video. For their efforts, Milles and Stow will have their video aired at Texas Tech’s October Board of Regents Meeting.

They also were treated to lunch with President Guy Bailey and other faculty and administrators.

The lunch was in Bailey’s office. Catered.