The Lubbock tornado of 1970 and Hurricane Celia sparked the opening of the Wind Science and Engineering Research Center to study destructive storms. 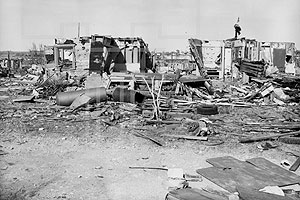 The anniversary of the 1970 Lubbock tornado sparked the gathering of four decades of data, of studying the destructive storms and developing new life-saving technologies.

The deadly F-5 May 11, 1970 tornado that swept through Lubbock, and Hurricane Celia, which devastated Corpus Christi later that year, easily could have had no positive outcomes.

But as Texas Tech’s Wind Science and Engineering Research Center (WISE) prepares to commemorate its 40th anniversary, the event marks the gathering of four decades of data, of studying the destructive storms and developing new life-saving technologies and methods of warning and damage mitigation.

Kishor Mehta, Horn Professor in Civil Engineering and former director of the center, said that a group of professors was motivated by the 1970 disasters to form the center, which was originally called the Institute for Disaster Research.

“No one studied things like this at the time,” Mehta said. “We looked around us and realized we were in the perfect place to learn more about how wind damages buildings and how to prevent it. It was an opportunity to take a tragedy and turn it into a way to make concrete, positive change in people’s lives.”

Through the collaborative work of the center, scientists and engineers have collected one of the country’s largest repositories of wind damage data and helped develop the Enhanced Fujita Scale implemented in 2007 by the National Weather Service.

In 40 years, the center has grown to comprise 26 faculty affiliates from 12 research fields, three research associates, 10 professional staff, 20 grad students, and it encompasses research expenditures averaging about $2 million per year.

Led by Mehta, Texas Tech developed the first doctoral degree curriculum in wind science and engineering in the U.S. The multidisciplinary degree was approved by the Texas Higher Education Coordinating Board in 2007. 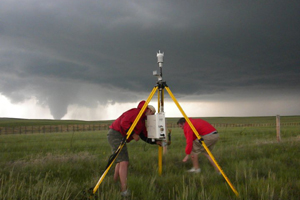 WISE researchers have garnered national and international acclaim for Texas Tech. For the past two spring seasons, a group of 20 graduate students, faculty and staff have been a major part of the VORTEX2 project, the collaborative nationwide study exploring the origins, structure and evolution of tornadoes. Read more about the VORTEX2 team here.

Ernst Kiesling, a professor of civil engineering, is a founding member and executive director of the National Storm Shelter Association. Kiesling and a team of Texas Tech wind researchers have led the nation in setting design standards for storm shelters.

However, even as Texas Tech’s wind center has been the leader for study and research on the destructive forces of wind, the center naturally has emerged into a leading proponent of harnessing the power of the wind as a source for the nation’s sustainable energy supply.

“There was a realization that the area was going to grow in wind power very quickly,” said Andy Swift, director of WISE. “So we wanted to add that to the suite of research activities at the center – research and education in wind power,” Swift said. “It’s an area I had worked in for decades, so coming to Texas Tech was a good fit.”

The Power of the Future

Swift said there are four main areas of wind power research that the center is investigating, which include: wind characterization and wind turbine reliability and performance; wind farm interactions – how turbines react and interact with each other; water desalination – using wind power to pump and desalt water using reverse osmosis; and increasing wind power education and the available workforce.

With the Department of Energy goal to have 20 percent of the nation’s electricity coming from wind power by 2030, Texas Tech will play an integral part in making that a reality.

“That is a huge undertaking, but it is very doable,” he said. “We’re about one-tenth the way there and we have 20 years to do it. There has to be major education and workforce changes to meet those goals, and we are a part of that. But Texas Tech cannot do it alone – we have to partner with other schools and other parts of the country. It’s a big, aggressive agenda, and it’s exciting to be a part of it.”

WISE will host a demonstration of the facilities at 2-4:30 p.m. May 8 in Building 250 at the Reese Technology Center, including the field site, debris impact, VorTECH, radars, StickNet, and alumni, student and faculty posters.