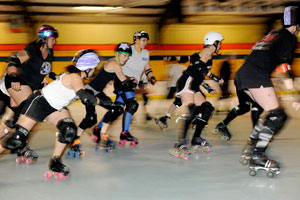 During practice, the West Texas Roller Dollz work on their speed, agility and learn how to minimize injuries.

But at night, they become wheel warriors.

When the clock strikes 7 p.m., Lauren Whitman, Texas Tech archaeology instructor, straps on her glittery skates and protective knee pads to go to battle for roller derby. Often, she is joined by Katherine Ehlers, Texas Tech Museum research assistant, for the West Texas Roller Dollz practices. The pair is hell on wheels.

Whitman admits her students are surprised by the extracurricular activities she indulges in after class hours.

“They laugh about it a little bit because I don’t really seem like the type, I guess,” Whitman said. “Most of them think it’s pretty cool, and I have sold tickets to them for the bout.”

On Thursday evenings, the Dollz flock to a local rink dressed in protective gear and knee-high socks. At practice, the women appear tame, but do not be fooled. The Roller Dollz take the rink by force at bouts. Whitman can attest the Dollz mean business at competitions.

The first thing Dollz are taught is how to hit and how to take a hit correctly to minimize injuries. Despite training, injuries are inevitable. Whitman suffered a tailbone injury that took eight weeks to heal. She said that has been the worst of her injuries so far.

Concentration is key to survival in this game. Although Whitman strives to be technical on her skates, in the back of her mind she knows she has not skated since she was 10 years old.

“When we’re skating, practicing or scrimmaging, the skating is the part you’re not supposed to think about,” she admits. “The skating is supposed to be automatic. You have to concentrate on everything else. When you’re a kid, that’s all you’re doing is skating and there is not all this other stuff happening with a strategy involved, in addition to not falling over.”

Whitman is not the only team member to have this derby alter-ego. Ehlers revels in the idea of having two personalities.

“You get to be two totally different people,” Ehlers said. “Most people expect you to be the same person out in the rink as you are in real life, but that’s not how it is. It is a great way to blow off steam and get some exercise.”

Ehlers said she is working on getting a lot meaner in the rink while being sharp on her flashy skates. She has sprained her shoulder, but other than that has incurred only a few bruises from falling.

The girls in roller derby are admirable because they can withstand more than bruises, she admits.

“I brag on them all the time,” Ehlers said. “It is so well run, they all work so hard, have families and other hobbies. They are all fantastic because they can balance derby with their busy schedules.”

This pair and the other Dollz inspire Tamra Walter, professor in the Department of Sociology, Anthropology and Social Work, to attend practice. She plans to try out for the team in the near future.