Kai Zhang has made it his mission to cure Leishmania, the second-leading parasitic killer. 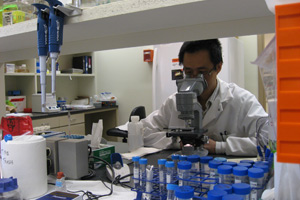 Since 2000, Zhang has devoted himself to studying Leishmania and rendering the deadly organism harmless.

They’re about a third of the size of a mosquito, but the sandfly’s bite can pack a miserable, if not lethal, punch.

It’s not that the sandfly itself is poisonous. But the parasitic Leishmania protozoa in its saliva can cause anything from itchy skin irritation or disfiguring ulcers that take months to heal to a painful attack on the body’s organs that could eventually lead to death.

But one Texas Tech researcher is dedicating his career to finding the chink in the armor of these protozoa, which, in its most virulent form, is the second-leading parasitic killer after Malaria.

Kai Zhang, an assistant professor of biology, has studied the protozoa since 2000. He recently received a Recovery Act award of $136,000 from the National Institutes of Allergy and Infectious Diseases to study certain infection-causing lipid molecules in Leishmania in the hopes of diffusing them and rendering the organism harmless.

“You can find sandflies mostly in the Middle East, Africa, some parts of South and Central America – mainly tropical and sub-tropical areas,” Zhang said. “It’s kind of a blood-sucking insect. It can transmit the infective organism into humans or animals. Humans are just one of Leishmania’s hosts, and we’re probably accidental hosts. The natural hosts in the world are rodents and canines.”

A Variety of Species

The World Health Organization estimates about 12 million people are infected with cutaneous, mucosal or visceral leishmaniasis. Severity of the disease is dependent on what species of Leishmania that infects a person.

About 80 percent of the time, the infection causes cutaneous leishmaniasis, which causes lesions on the skin and is found throughout the world in tropical and sub-tropical areas. Less common mucosal leishmaniasis tends to affect the mucosal areas of the mouth, nose and pharynx and can cause disfiguration. This form occurs mostly in South and Central America. 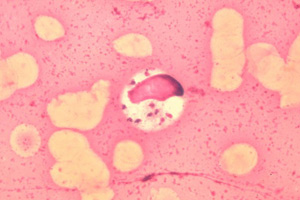 Leishmania (pictured above) can lead to visceral leishmaniasis, which is contracted by an estimated 500,000 people a year. Photo courtesy of Centers for Disease Control and Prevention.

Part of the problem, Zhang said, is that no safe vaccines exist, and the few treatments for infected patients are old, outdated and cause strong side effects.

“Right now, there’s no sure cure,” he said. “We have antimony-based compounds as the frontline drugs. But, they’ve been used for more than 50 years. They have to be administered by injection and have strong side effects.  Also, Leishmania have developed resistance to these drugs. Alternative drugs include pentamindine and Amphotericin B, which are also expensive and difficult to administer. So far, the only effective oral treatment for leishmaniasis is Milterfosine.”

For cutaneous infection, Zhang said most of the time the best way to treat it is to let the body’s immune system heal the infection, though it may take a few months to a few years for the lesions to go away.  But mucosal or visceral infection has to be treated.

“In terms of control, people are trying to develop a safe, effective vaccine and new drugs,” he said. “People are working really hard to make them. So far, the most low-tech, but most cost-effective way to deal with Leishmania is to avoid getting bitten by sandflies.”

While the diseases are currently contained to developing nations in tropical or sub-tropical areas, global climate change and human migration may cause these diseases to thrive in other parts of the world such as the United States and Europe, he said.

In 2007, a team of doctors at the University of Texas Southwestern Medical Center identified nine North Texas cases of the infectious skin disease. None of the patients had travelled to areas where the disease is common.

“On one hand, we’re trying to understand the mechanism behind why certain proteins or lipids in Leishmania are important to infection,” he said. “On the other hand, we’re trying to see if we can we use that knowledge to generate new therapeutics. Right now, the major challenge is the translation of the data from basic research like what we are doing in my lab to something that can be used effectively, such as a new drug or vaccine.

“We can do a lot of beautiful research, but how can we convert that into a product that people can use? That’s what we’re trying to solve.”

View images of leishmaniasis below. Viewer discretion is advised.