Interim Dean Lawrence Schovanec will become the next dean of the college on June 1. 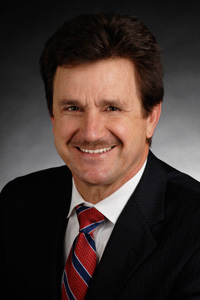 Schovanec became interim dean in September 2008. Prior to this, he served as chairman of the Department of Mathematics and Statistics beginning in 1999.

Officials at Texas Tech announced that Interim Dean Lawrence Schovanec will become the next dean of the College of Arts and Sciences effective June 1.

The announcement came from Provost Bob Smith, who said Schovanec was one of 31 people to apply for the job.

“We have appreciated Dr. Schovanec’s leadership from 2008 to 2010 as interim dean,” Smith said. “It has been a pleasure interacting and working with him on many of the College of Arts and Sciences’ developments in the last 14 months. I’m sure he will continue to grow and develop the college in the years to come.”

Schovanec said he was honored to receive the appointment.

“It’s a privilege to serve Texas Tech University and work with my colleagues in this capacity,” Schovanec said. “The College of Arts and Sciences will continue to emphasize a culture of teaching excellence, while strategically growing research and enhancing our outreach and engagement, locally and globally.”

Schovanec became interim dean in September 2008. Prior to this, he served as chairman of the Department of Mathematics and Statistics beginning in 1999. He joined the faculty in 1982.

Schovanec earned his doctorate in mathematics from Indiana University, his master’s degree from Texas A&M University and his bachelor’s of science degree from Phillips University. He has received the President’s Excellence in Teaching Award and is a member of the Texas Tech Teaching Academy.

He has published widely in academic journals and has spoken at numerous professional conferences. His research interests are in the fields of biomechanical and physiological control systems and solid mechanics. He has received more than $3 million in external funding for his research.