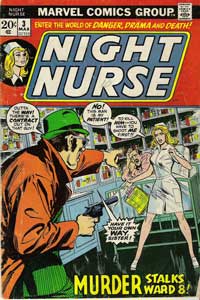 Night Nurse was unusual for nursing comics at the time – typically full of romance and fluff meant to woo females.

An ill-fated series from the 1970s provides a glimpse at how the comic book industry struggled to utilize strong female characters even well into the Women’s Movement, says a Texas Tech librarian and pop-culture guru.

Even hardcore coinsurers of Batgirl and Wonder Woman will most likely stumble at the mention of Linda Carter, protagonist of the Night Nurse series.

And no wonder – the Marvel series survived only four issues before it was cancelled in 1972 despite what Rob Weiner, an associate librarian, describes as strong writing, ER-worthy plotlines and solidly defined characters.

In an article for the International Journal of Comic Art, Weiner says Night Nurse was unusual for nursing comics at the time – typically full of romance and fluff meant to woo females.

In the first issue, Carter actually breaks up with her boyfriend in order to pursue her nursing career. In later issues, she fends off the chief of police and faces down a killer.

“From its cover, Night Nurse looks like it would be a typical nursing comic, but it’s not,” Weiner said. “The stereotype of the submissive nurse isn’t there.”

By the fourth issue, the series had begun fleshing out side characters and tackling deeper plots, Weiner said.

So he finds it telling that the series, written by a woman and starring a strong female character, was cancelled so quickly.

“I think Night Nurse ultimately wasn’t successful because no one knew what to do with it,” Weiner says. “It was really pretty progressive for the time, even though the Women’s Movement was in full swing.”

Weiner is a Texas Tech author, librarian and instructor with expertise on topics ranging from the Grateful Dead to American presidents in film. His books include “Marvel Graphic Novels and Related Publications: An Annotated Guide,” and “Captain America and the Struggle of the Superhero: Critical Essays.”