The men's and women's rodeo teams finished third and fourth for the year among 16 schools in the Southwest region. 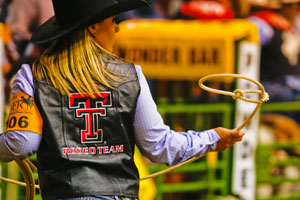 Top finishers from the competition will represent the Texas Tech Rodeo Team at the College National Finals Rodeo in June. Photo courtesy of Craig Kelley.

The Texas Techs men’s rodeo team finished third, while the women’s team finished fourth, both out of 16 schools for the 2009-2010 school year in the Southwest region year-end standings.

C.J. Kerr was crowned reserve regional champion steer wrestler. Along with Creasy, the freshman animal and food sciences major will compete for the national championship at the 62nd annual College National Finals Rodeo June 12-19 in Casper, Wyo. Kerr, from Paradise, qualified by finishing second for the year in the steer wrestling event for the Southwest region.

In the women’s category, after finishing fourth in go round one, Taylor Langdon, an animal and food sciences major from Sanger, placed first in the finals and first overall in barrel racing.

Teammate Dani McGuire, an agriculture and applied economics major from Odessa, placed fourth in the first go round of the breakaway calf roping and finished fifth overall.

Erica Creswell, a senior psychology major from Weatherford, Okla., finished the year in third place in the goat tying standings. She will represent Texas Tech in Casper.