An ecotoxicologist has uncovered a lead problem in the oldest and poorest parts of Louisiana's historic city. 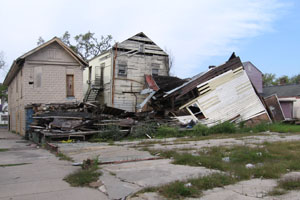 Lead concentrations that exceeded a regulatory threshold for safety were discovered in 15 percent of the samples. The highest concentrations of lead were found in the oldest parts of the city, posing a significant risk to residents.

While studying the environmental impact of Hurricanes Katrina and Rita, recent Texas Tech-led research has discovered high concentrations of lead in the poorest and oldest parts of New Orleans.

The results, one of five pollution studies related to Katrina, were published online in a special issue of Environmental Toxicology and Chemistry.

“Our research to evaluate contaminants in New Orleans was critical to determine if storm surges and flooding altered chemical concentrations or distribution,” said George Cobb, a professor in the Department of Environmental Toxicology at The Institute of Environmental and Human Health. “We found that long-term, human-health consequences in New Orleans are difficult to attribute to chemical deposition or redistribution by Hurricanes Katrina and Rita. However, lead was found in elevated concentrations, particularly in the most disadvantaged areas of New Orleans.”

To calculate the impact of chemical contamination, a multidisciplinary research group from Texas Tech studied 128 sampling sites across New Orleans. The team combined their findings with data sets generated by Burton Suedel with the U.S. Army Corps of Engineers. Maps were then compiled from the resulting data to reveal contaminant distribution across the city.

While the team’s findings indicated that levels of lead frequently exceeded regulatory thresholds, further research showed that many of the contaminants were present in high concentrations before the storm season and that lead may have posed a significant risk to New Orleans residents for years before Hurricane Katrina.

Lead in soil poses a significant risk to residents who returned to their homes following the evacuation, especially children, Cobb said.

Hurricane Katrina, which hit New Orleans in August 2005, remains the costliest and deadliest hurricane to ever hit the United States. When the category five hurricane hit land the resulting surge extended six miles inland, breaching the levees of New Orleans, causing flooding to 80 percent of the city to depths of 19 feet.

In human terms, Katrina resulted in 1,800 confirmed fatalities spread across six states with at least 700 people confirmed missing and more than 1 million people displaced. Katrina-related damage is estimated to exceed $84 billion. Yet, it is the indirect environmental impact which continues to pose a risk to the population of New Orleans.

“While evidence suggests that hurricanes may likely increase in intensity, resulting in even greater economic damage in the future, there are social and cultural factors that are also important regarding the future impact of hurricanes,” said Bill Benson, a director with the U.S. Environmental Protection Agency’s offices on the Gulf Coast. “It is important that higher priority is given to understanding social factors and demographic patterns pertaining to continued development along our nation’s coastline.”