Susan Fortney was honored for advancing and enhancing legal ethics in Texas. 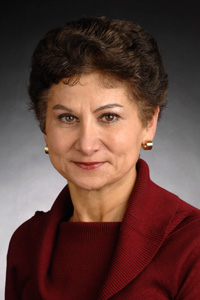 A professor of law was selected as recipient of the Lola Wright Ethics Award by the Texas Bar Foundation.

Susan Saab Fortney, a Horn Professor and associate dean for research for the School of Law, received the award based on her outstanding public service in advancing and enhancing legal ethics in Texas.

Fortney’s current work focuses on law firm ethics and governance. She has conducted empirical studies on lawyer conduct and co-authored the nation’s first textbook on legal malpractice law. Fortney has also served as a volunteer in the Texas disciplinary system at every level from chairing the Texas Supreme Court Grievance Oversight Committee to serving as a volunteer on a local grievance committee.

“Congratulations to Susan not only for receiving this most prestigious award, but also for her leadership in our profession in the vitally important field of ethics,” said Walt Huffman, dean of the Texas Tech School of Law.

The Lola Wright Foundation Award is the most prestigious Legal Ethics Award in Texas. It was established in 1985 and is presented in memory of Coleman Gay, a distinguished Texas lawyer who exemplified the highest standards of professional ethics. A cash award of $5,000 is given to the recipient for donation to the charity of his or her choice.