Graduate Class Serves More Than Just Food to the Hungry

Debra Reed's class has developed a cookbook with healthy and inexpensive meal options for the nation's undernourished. 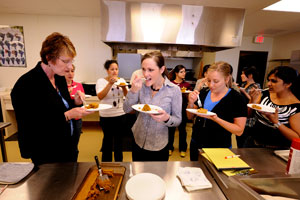 During the semester, the class worked on creating recipes that the “food insecure” could prepare and purchase for low cost.

When people are gracious enough to donate food to the hungry, they generally give away the cheap and generic products that have been tucked back in their pantries for a while—beans, canned foods, tortillas, bread…sometimes maybe even some fresh meat.

This is not the case for Debra Reed, professor in the College of Human Sciences, and her graduate class, whose main project for the semester was to develop a healthy cookbook with simple and inexpensive recipes that are simultaneously tasty.

The purpose of Reed’s class is to not only feed the hungry, but to provide them with healthy meal choices and educate them about healthier foods and physical activity.

She’s taught the class for several years, and each semester the class holds a different focus.

“We felt like this was an important area to give our students some more awareness and also to possibly make a really small difference in Lubbock and maybe beyond,” Reed said.

Reed and her graduate class showcased the cookbook Wednesday night. Some of the recipes included in the cookbook were a pumpkin chili Mexicana, and spinach and ham quiche as well as an easy chicken pot pie. She said that her class has gained a greater awareness of homelessness and that it is helping them put a face on the issue of food insecurity instead of just reading about it.

During the semester, Reed and some of her graduate students would head to Family Impact Church every Wednesday evening and feed the hungry. Reed said many churches around Lubbock would come to Family Impact to volunteer and distribute their share of donated food and serve it to the 250 people who show up. 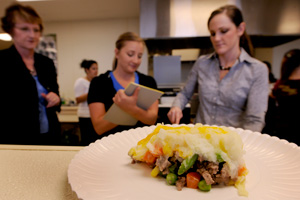 When they weren't testing out recipes for the cookbook, Reed and some of her students spent Wednesday evenings feeding the hungry at Family Impact Church.

Throughout the semester, Reed and her class developed nutrition education materials for people who come to the church. Healthy and inexpensive grocery lists as well as ideas for fun physical activity were among the materials.

“There are healthy grocery lists for middle and high income people but, we are adapting that for lower income people,” she said.

The class also worked on creating innovative recipes that the “food insecure” could prepare and purchase for low cost. Reed explains that food insecurity is a reference for people who are not homeless, but are unsure whether or not they will receive their next meal. She said people that are "food insecure" have to make everyday choices whether they are going to purchase food or pay their rent or bills.

“The cookbook is very needed because there are a lot of church groups nationwide and nonprofit and volunteer groups who do these eating types of projects and they may not have much expertise in terms of nutrition and preparation,” Reed said.

Many of her students could not find many quantity-filled recipes that are distributed at food kitchens or food centers, so she said the students had to do a lot of creative thinking. It was brought to Reed’s attention that these recipes should be posted on a Web site in order for other people to view the content and use the recipes.

She also said that she and her class are trying to help the hungry find inexpensive ways of physical activity, especially for children. She said a lot of the homeless and "food insecure" do not exercise because they believe the only form of exercise comes in a gym membership. Reed said there are many activities that can be done with balls or jump ropes or games that incorporate a healthy amount of activity in children as well as their parents.

“We are actually encouraging parents to be physically active with their children,” Reed said. “It helps both the parents and children, and research has shown that children really want their parents to do things with them.”

Role-modeling plays an immense part in the healthy development of a child, which is why Reed and her class strive to offer healthy and inexpensive opportunities to these people.

“Connecting kids and their parents with food preparation as well as physical activity is just a win-win situation,” she said.

Students Discover Ways to Aid the Hungry on the South Plains