Cook comes from Texas Tech Athletics, and will oversee the media relations efforts of the university and act as the university's spokesperson. 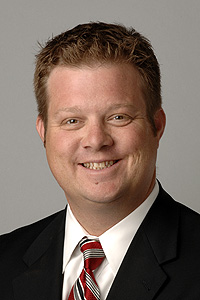 Chris Cook joins the Office of Communications and Marketing as director of communications.

Long-time Texas Tech sports information director Chris Cook is taking on a new role at the university – director of communications.

“Chris is well respected and has extensive experience working with media from across the country,” said Mary Larson Diaz, associate vice president for external relations. “We look forward to the new ideas and energy Chris will bring to our team.”

Sally Logue Post, who has served as communications director is taking on a new role to concentrate on special projects and strategic communications needs.

Cook has spent the last 11 years in the Texas Tech Athletics Media Relations Office, the last nine as the department’s director of media relations. He oversaw the publicity efforts of the Red Raider football program and directed a staff of four sports information professionals, who coordinated the media efforts for Texas Tech’s 17 intercollegiate sport programs.

Prior to landing on the South Plains, Cook was an assistant sports information director for five years at Saint Louis University from 1994-99 and spent the 1993-94 season as an intern at Western Kentucky University.

A 1993 graduate of Louisiana Tech University with a degree in journalism, Cook and his wife, Jennifer, have a four-year-old son, Jack.