Research has uncovered what was necessary for an uncommon hybrid species of bats to thrive where other mammal hybrids have failed. 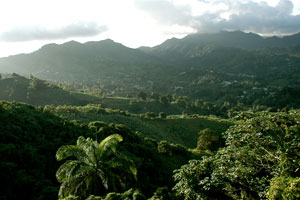 After the last ice age ended and glaciers melted, sea levels rose and marooned the hybrid bat population on the island of St. Vincent.

Sometime in the last 30,000 years or so, two separate bat species colonized the Caribbean and converged on islands in the southern Lesser Antilles. One came from Mexico while the other traveled from northern South America.

They likely met a third species already there, and all were genetically similar enough to mate and create a rare progeny in mammals – a viable hybrid that could reproduce and was larger and more robust than its parent species.

This ensured the new species’ survival and created questions for future researchers – how did Artibeus schwartzi get there?

The study, co-authored by doctoral student María R. Marchán-Rivadeneira and Robert J. Baker, Horn Professor of Biology at Texas Tech, will be published online May 31 in the Proceedings of the National Academy of Sciences.

Larsen and the team spent the past six years delving into the genetics and body type of A. schwartzi. They found that the modern animal shares genetic similarity to both Artibeus jamaicensis from Mexico and Artibeus planirostris from northern South America.

A. schwartzi is close in appearance to its parental species. But it’s bigger and more robust. The team discovered these fruit-eating bats on St. Vincent have a unique morphology and genetic makeup that’s probably due to historical hybridization events.

The evolutionary history of this bat has been the subject of debate for nearly three decades, said Marchán-Rivadeneira.

“A number of researchers have approached the enigma of A. schwartzi using excellent data sets,” she said. “It was through the combination of their knowledge and advanced molecular techniques that this amazing story emerged.” 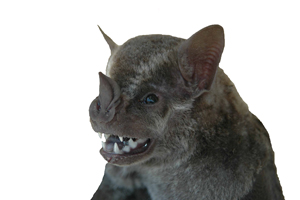 After the last ice age ended and glaciers melted, sea levels rose and marooned the hybrid bat population on the island of St. Vincent.

Hybrids in mammals are relatively uncommon, Larsen said, and most often result in a sterile offspring, such as a mule produced from a horse and a donkey.

“Hybrid speciation has been shown in fish, insects, reptiles and amphibians,” Larsen said. “There are really only a handful of examples of this happening in mammals. Most mammal hybrids are thought to be evolutionary dead ends, because they’re sterile or poorly adapted to their environment. Hybridization is typically looked at as insignificant to the speciation process because the parental species outcompetes populations of hybrids.”

Every now and again, the hybrid offspring can mate and produce fertile offspring. It’s a rare event, and multiple conditions have to be met. For starters, two different parental species must be relatively closely related with chromosomes similar in structure. Hybrids must be fertile, and then, following establishment, must be isolated from the parental species.

The team believes that A. jamaicensis and A. planirostris evolved separately on the mainland about 2 million years before, and their genomes had never “seen” each other before because the mainland environments isolated the two species.

As both species migrated and met on this series of Caribbean islands, they converged in the Lesser Antilles where they met a third closely related species and began mating.

“We hypothesize that the subsequent hybridization contributed to the formation of A. schwartzi,” Larsen said. “It’s a very successful component of the island’s ecosystem. Given the location of the island in the Caribbean, the geography of the region likely facilitated this event. As the most recent ice age ended, rising sea levels further isolated the hybrid population. It’s a story about 2 million years in the making.”