An area of remembrance, Memorial Circle has been a part of campus since the beginning, but its role has expanded to include memorials for many people. 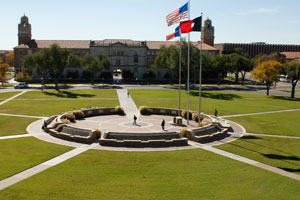 Memorial Circle is the one place on campus that is in the collective memory of visitors, students, faculty and staff.

Every day students walk through Memorial Circle, pass the flagpoles and listen to the gurgling and splashing sounds of Pfluger Fountain.

An area of remembrance, the circle has been a part of campus since the beginning. In spite of its early start, there is much mystery surrounding the reasons for the circle.

Memorial Circle is the one place on campus that is in the collective memory of visitors, students, faculty and staff. It is located near the main entrance to campus, and is to many a place of calm and quiet. When walking through the circle, the splashing of the fountains echoes around the circle and blocks out the bustling of students all around. It is an oasis of serenity within a busy campus.

At the beginning Memorial Circle was just that – a circle. The unpaved circle marked the center of campus. In 1948 the Texas Tech War Veterans Association dedicated this area following the end of World War II. The monument in the center reads, “Memorial Circle: dedicated in 1948 by Tech War Veterans Association to all whose service has brought honor to college and country." The history of the circle before this point is mostly unknown.

In 1967 President Grover E. Murray requested the flagpole be moved from its original location in front of the Industrial and Textile Engineering Building to Memorial Circle. The poles are located slightly to the west of the center of the circle because of a tunnel that runs underground. The new location made the flags clearly visible down Broadway Avenue. 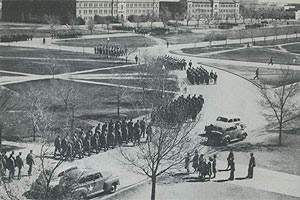 Cadets march from classrooms to barracks around Memorial Circle in April 1944. Image from "The First Thirty Years."

While Memorial Circle was originally dedicated as a World War II veteran's memorial, it is now also used to commemorate current students who have lost their lives. These students are honored with the lowering of the Texas Tech flag to half-staff. The dean of students then sends the flag, along with flowers, to the student's parents in remembrance. In addition, these students are honored at the Techsan Memorial, held every fall during homecoming week. The memorial ceremony also includes faculty, staff and alumni.

In 2001, the Student Senate passed a resolution that students should not walk on the grass in Memorial Circle to respect Red Raider veterans of all wars. Since the circle is considered a living memorial and it had long been a tradition for students, the senate requested the administration put up signs on the sides of the circle to notify students of the history of the circle. In 2002 the Pfluger Fountain was added to Memorial Circle. A dedication was held in April to honor the Pfluger family of San Angelo, whose gift allowed for the construction of the water feature.

In 2005 the Student Government Association began a campaign to increase student scholarships through its Paving the Way to Student Success campaign. The ambitious, student-led drive raised money for new merit and opportunity student scholarships by allowing donors to purchase a brick with the donor’s name on it. The bricks, highlighting three levels of giving, were placed in a sidewalk leading from the Administration Building to Memorial Circle.

Do you have memories of Memorial Circle from your time at Texas Tech? Share them in the comments.