'Art of West Texas Women: A Celebration' highlights 20 artists from the Panhandle to El Paso. 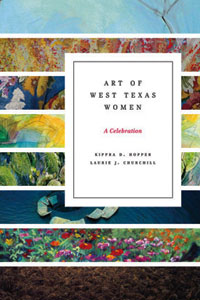 Attendees at the 32nd annual Lubbock Arts Festival will be the first to enjoy “Art of West Texas Women: A Celebration,” a book published by Texas Tech University Press featuring 20 artists from the Panhandle to El Paso.

In addition, a special gallery will exhibit selections of the artists’ works throughout the festival. Guests attending premiere-night festivities from 6-9 p.m. April 15 at the Lubbock Civic Center will have the opportunity to meet with the authors and many of the artists. Copies of the first edition will be on sale and available for autographing.

“Art of West Texas Women: A Celebration,” the first survey of practicing women artists in the West Texas region, features 150 lavish color images of the artists and their works.

Following in the tradition of Georgia O’Keeffe, herself an early interpreter of the West Texas Plains, “Art of West Texas Women” pays tribute to women visual artists living and working in an expansive, rugged landscape, the vast western half of Texas, far from the dynamics of urban art communities and large national markets. Representing several of each artist’s one-of-a-kind art works, the book also offers glimpses into the artists’ lives and inspirations.

The Lubbock Arts Festival is the largest fine art and fine craft show in West Texas, drawing more than 23,000 visitors and participants each year. The event runs April 15-18. Adult admission is $2 and all children age 12 and under, accompanied by an adult, will be admitted for $1. Download a printable scheduled.

Get a glimpse at the artwork and artists featured in the new book.

Kippra D. Hopper holds degrees from Texas Tech, where she is the Hutcheson Professor of Journalism. As author, editor and photographer, Hopper focuses her work on the American Southwest. She is also the author of “A Meditation of Fire: The Art of James C. Watkins” (TTUP, 1999).

Laurie J. Churchill, a former professor of literature and women’s studies program coordinator, holds degrees from Boston University, the University of Massachusetts and the University of California, Santa Cruz. She is the author of articles on classical literature and feminist pedagogy and is the lead editor of “Women Writing Latin: From Roman Antiquity to Early Modern Europe.” Currently, she is director of assessment in the College of Education at New Mexico State University.