Dao Thi Minh Van visited the Vietnam Center and Archive for more information about her father's time with the Military Intelligence Office during the Vietnam War. 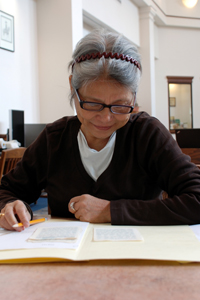 Van looked at information about an attack from United States records during her visit to the archive.

After years of countless interviews and searching for extensive information about her father, a Vietnamese woman decided to visit the Texas Tech Vietnam Center and Archive to find out more details of his life.

Dao Thi Minh Van, daughter of the founder of the Military Intelligence Office, visited the Southwest Collection/Special Collections Library to discover more information about an attack from United States unit records that are part of the center.

During the Vietnam War, Van was told that her father worked as a salesman in Phnom Penh, Cambodia, and received letters from him sporadically. When Van's father, Hoang Minh Dao, was sent to South Vietnam in 1948 to set up the intelligence network, Van was only three years old. Her mother passed away from Malaria three days before her father left. She did not find out about her father’s real title until after the war was over, and she never had the chance to see him, as Dao died during an ambush on December 14, 1969.

Following the war, Van successfully became the vice president of the Lotte supermarket chain in Vietnam as well as the owner of other companies. When she found out the truth about Dao, Van interviewed and recorded roughly 400 various intelligence officers relevant to his job in order to gain a full understanding of Dao’s life. She compiled all of her recordings into three books which she presented as gifts to friends of her father. Van still has many unanswered questions about her father and his death.

She was told that Dao was ambushed when he tried crossing the Vam Co Dong river with 17 other under-staffs in three different boats. While crossing, three American river boats ambushed the Vietnamese unit and Dao was shot. The assault was reinforced with artillery, helicopter gunships and tactical air support, which made Van believe that it was an intentional ambush. She has always questioned whether or not the information of her father’s trip was leaked out.

Afghanistan 101: Is America Passing the Test When it Comes to Counterinsurgency?