The former Raider Red and Masked Rider passed on their duties to the new mascots during the annual ceremonies. 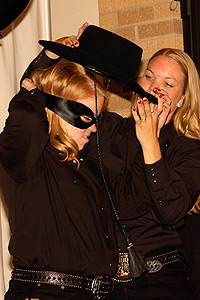 As Texas Tech gears up for football season, a new Masked Rider accepts the reins to Midnight Matador and last years' Raider Red is revealed.

Transfer of the Reins

The sophomore agricultural communications major grew up in what she refers to as a “red-and-black household.” Her parents, Kirby and Terri Chadwell, are Texas Tech graduates, and when Christi began learning how to ride horses at the age of 10, her father told her that she could someday fill the boots of the iconic mascot.

Chadwell has proven her father’s prediction accurate as she dons the Masked Rider’s cape. She will promote spirit within the university and goodwill for Texas Tech at athletic events and other school and civic functions across Texas.

The Masked Rider is a mysterious and striking symbol of Texas Tech school spirit and pride. Mounted on a black quarter horse and wearing a black mask, bolero hat, and a red-and-black cape, the Masked Rider leads the football team onto the field. Chadwell is the 49th student to serve as the Masked Rider.

The Garland native competed in barrel racing and goat tying with the goal, she said, of building skills that would benefit her in the role of Masked Rider. She joined the Masked Rider Field Safety Team and even queried members of the Center for Campus Life to find out what she would need to do to try out for the position.

“I did everything I could to put myself in a position to become the Masked Rider,” Chadwell said, “and I am overjoyed that the day has finally arrived when I get to carry on one of Texas Tech’s most treasured traditions.”

She expanded the role of the Masked Rider at Texas Tech athletic events as she appeared at more men’s and women’s basketball games than any other rider. She also continued a tradition started in spring 2009 of opening Texas Tech baseball games. 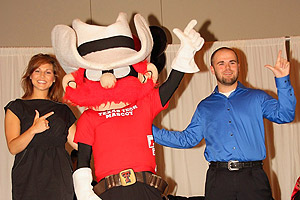 Courtney Rosenthal and Braden Dockery were revealed and honored for their duties as Raider Red during the Passing of the Guns ceremony April 16.

Passing of the Guns

After serving in secret as Raider Red, students Braden Dockery and Courtney Rosenthal finally revealed their true identities as Texas Tech honored them for their service.

The former mascots transferred their duties to new students during the fourth annual Passing of the Guns Ceremony.

With his red mustache and floppy white hat, the swaggering Raider Red is a symbol of Texas Tech spirit and pride. He was designed by Saddle Tramp Jim Gaspard based on the illustrations of Dirk West.

Dockery, a senior agricultural communications major from San Antonio, served as Raider Red for two years. He also is a member of the Saddle Tramps, and served as shotgun assistant and spirit chairman for the organization.

His favorite memory from serving in the costume: making his final appearance as Raider Red at the 2010 Valero Alamo Bowl.

“I am honored by the time I got to spend representing Texas Tech as Raider Red,” he said. “And to finish that experience in front of family and friends in my hometown was a fitting way to cap off two great seasons as mascot.”

Courtney Rosenthal, a senior health education major from Mesquite, served as Raider Red for 2009-2010. In addition to her duties as Raider Red, she was pledge trainer for Texas Tech’s High Riders.

“I loved the time I spent as Raider Red,” she said. “And it was exciting getting to represent Texas Tech and show our Red Raider spirit on a national stage.”

The students acting as Raider Red spent hundreds of hours in costume as they made 200 appearances over the past year at athletic and community events.

Big Shoes to Fill: Student is President for a Day