Students Discover Ways to Aid the Hungry on the South Plains 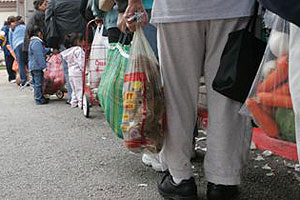 The South Plains Summary of Hunger in America study found many people had to forgo paying for other necessities to afford food.

The results from a study by a Texas Tech research class have shed some light on the plight of the underfed and hungry on the South Plains.

Professor Alan Reifman’s spring 2009 Research Methods class participated in a national hands-on study with the South Plains Food Bank (SPFB). The study gathered facts and statistics regarding the advocates for the undernourished in the South Plains area for the National Food Bank.

According to the South Plains Summary of Hunger in America 2010 study, an average of 84,000 people in Lubbock are provided food by the SPFB annually, nearly 11,000 people in any given week.

The survey was sponsored by an organization called Feeding America and overseen by a research firm known as Mathematica Policy Research. The project included 185 food banks throughout the nation.

Reifman joined the survey after he received word from Trine Solis-Jackson, an SPFB employee and former student of his, that a national hunger survey project would be taking place.

Solis-Jackson explained that the students would be interviewing people in need of food assistance at SPFB food distribution events such as those held at churches and community centers. Reifman said he took this as an opportunity for his students to gain a firsthand view of research used in the real world. He said Solis-Jackson and some other employees of the SPFB came into the class to train the students how to conduct the interviews and had the students conduct practice interviews.

He said he believes this project embodied all three of the major missions of Texas Tech: research, teaching and service.

When asked about the interviews, many of Reifman’s students said that they found face-to-face interviews more difficult than they had expected. Some of the students claimed that the questions asked could be uncomfortable at times.

“Of all the projects my classes have done over the years, the hunger survey is easily the one of which I am most proud, given the societal importance of what we studied,” said Reifman.

White House Officials to Get Lessons from Texas Tech Experts

In Focus: Conference on Mexican-American Families

Texas Tech on the Cutting Edge of Autism Research