The Llano Estacado RoboRaiders challenged 57 teams from seven states and Mexico to secure a place in their first national competition. 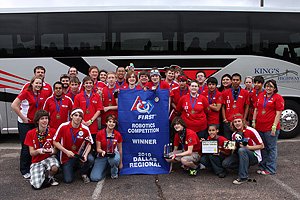 The RoboRaiders won the FIRST Robotics regional competition in Dallas to advance to the championship on April 15-17.

With the help of engineering student mentors, the Llano Estacado RoboRaiders are poised to advance to the For Inspiration and Recognition of Science and Technology (FIRST) Championship April 15-17 in Atlanta.

The team advanced after a win at the 2010 J.C. Penney Dallas FIRST Robotics regional competition held in March at Southern Methodist University.

The competition challenged 57 teams from seven states and Mexico to build a robot that could compete in a unique robotics game called Breakaway. The game included aspects of soccer in which the robots were required to kick, shoot or throw soccer balls into a net while battling other competition robots.

Gina Munch, a master of agribusiness student and a mentor for the RoboRaiders, said one of the unique features of the team is that no experience is required. She said she decided to join to learn more about robotics, how to use power tools and compete in different challenges.

“The no-experience policy also brings in high school students that otherwise would have self-selected out of robotics, engineering and science,” Munch said. “It shows them that all you need is a drive and willingness to learn.”

Robert Abbe, a sophomore at Lubbock High School said he joined RoboRaiders as a freshman in 2008. He said the program is great for introducing science and math and that middle and high school students should think about joining.

“We have access to the Texas Tech facilities that we couldn’t get in the high school competitions plus, the seasoned advice of the college students,” Abbe said.

Texas Tech mentors, particularly those with a background in engineering, are able to help younger participants by teaching them the design aspects of building a robot, computer science programming, mechanical and electrical engineering, and how to work in a team, Munch said.

"Working with RoboRaiders is a non-traditional kind of mentoring network," she said. "We try not to have a teacher-student role. We use a peer-to-near peer networking with younger students. We are able to help teach robotics, while also relate since we are closer in age." 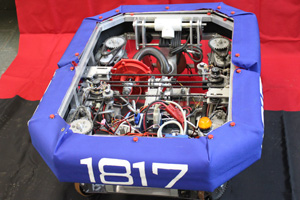 The RoboRaiders' robot participated in a game of soccer in which it was required to kick, shoot or throw soccer balls into a net while battling other competition robots.

The team went on to compete in the seventh annual FIRST Robotics regional competition held March 26 at the University of Denver’s Magness Arena. The RoboRaiders attained the Team Spirit Award, sponsored by Chrysler, and was runner-up for the Industrial Safety Award, sponsored by Underwriters Laboratories.

For five years, the RoboRaiders have competed in FIRST competitions, this year being the first to qualify for the national competition.

They will travel to the Georgia Dome in Atlanta for the FIRST championship April 15-17 to compete against 255 teams from 40 states as well as Brazil, Canada, Mexico and Australia.

Watch the RoboRaiders in Dallas

Inventor Dean Kamen founded FIRST (For Inspiration and Recognition of Science and Technology) in 1989 to inspire an appreciation of science and technology in young people.

With the support of many of the world's most well-known companies, the not-for-profit organization hosts the FIRST Robotics Competition and FIRST Tech Challenge for high-school students, the FIRST LEGO(R) League for children 9-14 years old, and the Junior FIRST LEGO League for 6 to 9 year-olds.