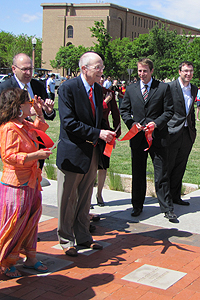 The ribbon cutting ceremony marked the completion of a project honoring Paving the Way to Student Success donors.

The Student Government Association (SGA) and Office of Institutional Advancement cut the ribbon for a scholarship sidewalk commemorating donors to the Paving the Way to Student Success initiative.

Through Institutional Advancement, money raised for merit and opportunity student scholarships surpassed the goal of the student-initiated project, which launched in 2005.

“The success is a clear indication that the university’s leadership and supporters recognize the importance of scholarships,” said 2005-2006 SGA President Nathan Nash, who launched the campaign. Nash is now an associate with Hunter Equity, LLC in Dallas.

“My reaction to the amount of money raised is one filled with gratitude to all who supported the campaign, and there are many people who deserve credit for its success," he said. "Most importantly, I’m thankful that current and future students have access to scholarship dollars that will assist them in their pursuit of higher education, which will strengthen our university and our state over the long term.”

The scholarship sidewalk runs from the Administration Building to the center of Memorial Circle. Bricks recognize three levels of giving – Distinguished, at $1,000 or more; Leadership, at $10,000 or more; and Excellence, at $100,000 or more.

Texas Tech hosted the ribbon cutting and dedication ceremony during Arbor Day. The SGA and Office of Institutional Advancement broke ground on the sidewalk during 2006 Arbor Day festivities, which current SGA president Suzanne Williams said was a fitting way to officially end the project.

“I am honored to have the opportunity to close the loop on a campaign so many have put their hearts and time into,” Williams said. “When elected as leaders into Student Government, we are encouraged to analyze the kind of legacy our terms will leave. It has been an honor to be part of a legacy of serving the students with this initiative starting in 2005 and on to completion in 2010.”