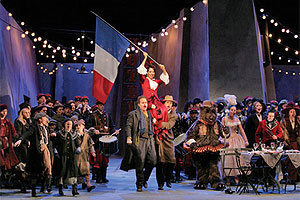 From the 2007 performance of Puccini's "La Bohème." The Santa Fe Opera casts some of the most talented singers from around the world.

Two young singers, Jamie Rose Guarrine and Sean Anderson, will perform a concert at 2 p.m. April 18 followed by a reception. The concert is available for free to the general public at the Lubbock Memorial Civic Center Theater. The concert will include “Words and Music,” a short original piece, for the first half of the program. The second half will consist of popular arias and songs.

In addition, the opera singers will offer daytime performances for about 2,000 area public-school students to learn about and experience the opera through "Words and Music." Follow a live feed on Twitter @TTUEvents at 11:15 a.m. April 16 to see and hear the opera during their time with the students.

“Hosting Santa Fe Opera singers during their spring tour is fast becoming a Lubbock tradition,” said Jo Moore, administrator for the series. “Texas Tech students, faculty and staff, as well as the Lubbock community, have had the opportunity to hear singers from a world-class opera house for seven years.”

The public concert is part of the Lubbock Arts Festival.

Guarrine is a soprano singer for the Santa Fe Opera. It is her second apprenticeship with the company. She also has performed with Kentucky Opera, Utah Opera, the Opera Company of Philadelphia, the Saint Paul Chamber Orchestra and the National Symphony of Costa Rica.

Anderson is a baritone singer for the Santa Fe Opera. He was a Santa Fe Opera Apprentice in the summers of 2004 and 2005. In 2007, he returned for the company’s One-Hour Opera production of "The Night Bell." He also has performed Marcello in the acclaimed Baz Luhrman production of "La Bohème."