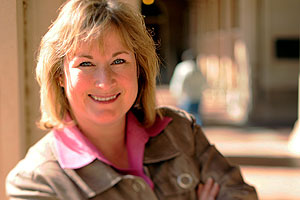 One of the big “intelligent risks” Rutherford said she made involved a proposal that landed on her desk in 2002 to feature the airline in the documentary, “Airline,” on A&E.

Her husband didn’t have to get up until quarter of seven, so Linda Rutherford tiptoed to the shower and dressed as silently as she could. She left at 6:30, parked and took a shuttle to Love Field. But when she got to the gate, she discovered everyone sitting comfortably rather than boarding the 7:55 a.m. flight for Lubbock.

Even for the vice president of communications and strategic outreach for Southwest Airlines and College of Mass Communications alumna. Rutherford flew back to her alma mater to talk about communicating in the rapidly changing media landscape.

Rutherford stands at the helm of a public relations arm that’s grabbed lots of attention in the world of Web 2.0. PR News named “Nuts About Southwest” as the best corporate blog for 2007, 2008 and 2009; and PR Week named Southwest Airlines’ Corporate Communications Department as the public relations Team of the Year in 2000.

It's All About People

But she defers credit for the success more to the corporate environment in which she works and the talent of those on her team. One, she said, where the nearly 35,000 employees are trusted to do the right thing and where creativity and duty to service are admired and encouraged.

That environment, she says, has proven fertile ground for growing a successful social media strategy for the airline, allowing it to branch out more naturally into effective communications on the Web.

“Anyone can buy planes and start an airline,” she said. “Our people make the difference in our brand. What a great opportunity social media is to tell the brand story. But if you don’t have transparency, if you don’t have trust and if management doesn’t believe that the employee is going to do the right thing, then that is going to hamper your abilities to have a strong social media strategy. 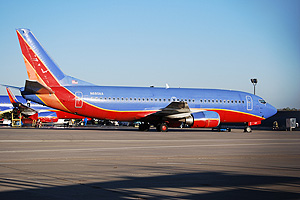 Southwest employees are trusted to do the right thing, and creativity and duty to service are admired and encouraged.

Rutherford worked on the newspaper at Newman Smith High School in Carrollton and knew exactly what she wanted to be when she grew up. So when it came time to go to college, she looked into different journalism programs.

Thanks to a warm welcome from Raiderland, she immediately chose Texas Tech. But college almost didn’t happen. As the daughter of a single mother of two, Rutherford said finding the money for school wasn’t easy.

“About three days before my room and board bill was due, I was short. My mom handed me a wicker basket that was a music box. Inside were 25 $10 bills folded up that she had obviously saved for weeks and months to be able to give me. The following day, the Rotary Club of Dallas came through with a scholarship. It was like pennies from heaven. I think that shaped my experience because I almost didn’t get here. It meant so much more to me. I had to prove I was worth their investment.”

Jan Childress, associate vice president for student affairs & external relations, was director of Student Publications at the time. She said she remembers Rutherford’s drive and passion.

“She was a determined and talented writer and editor,” Childress said. “She was one of my best editors ever. She was really determined and focused on being a journalist. She knew what she wanted to do. She landed an internship at Newsweek and no one was surprised. She was a lot of fun, too. She always had a smile on her face.”

She began her career as a reporter for Newsweek magazine in New York before coming home to Texas to work as a reporter for several Dallas-area suburban newspapers, then landing a job at the Dallas Times Herald.

Looking for a Place to Land

But when the Times Herald folded in 1991, she was out of a job as a reporter covering the airline industry. An opening in the then-tiny communications office of Southwest Airlines seemed perfect.

“You walked into corporate headquarters, people would smile and say hello, and they didn’t know me from Adam,” she said. “People were always so helpful. It was like, is this place real? It’s not perfect. It’s not Camelot. But it’s a magical place. It’s a group of people who really care, and are really focused. Everyone’s on the same page. It’s been a great experience to be involved in all that.”

Airline: The Real Southwest Takes Off

One of the big “intelligent risks” Rutherford said she made involved a proposal that landed on her desk in 2002 to feature the airline in a documentary on A&E.

“This show, ‘Airline’ had been wildly popular in the U.K. for many years,” she said. “They were looking to bring the show to America and were looking for an airline partner that would be willing to do it with them. I remember getting the proposal and thinking, 'No one is ever going to let us do this,' and the proposal went on the corner of my desk.”

But after meeting with the group representing the television show, Rutherford said it became clear the company had done their homework. The next step would be convincing the company’s leaders that showing the good, the bad and the possibly ugly day-to-day operations of an airline on national TV could be a boon to business. 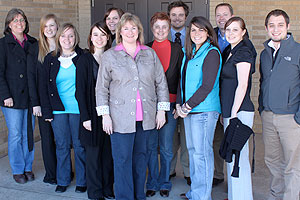 Rutherford flew back to her alma mater to share her expertise with the Office of Communications and Marketing team about communicating in the rapidly changing media landscape. Click to enlarge.

“We ran three seasons,” she said. “We boosted airline bookings on Monday nights by 9 percent after the show aired. We tripled the number of resumes coming in the door on Mondays and Tuesdays. We accomplished the objective of putting our people in the center of our brand essence. You fell in love with the characters. The stories, whether they were good or bad, allowed our employees to shine.  Even if someone was screaming at them, how our employees reacted got them fan mail.”

From that experience, Southwest Airlines became part of other television programs such as “Extreme Makeover: Home Edition,” “The Bachelor” and “Top Chef,” as well as films such as “Ocean’s Thirteen” and “Transformers.”

“Our online presence came after our experience with ‘Airline,’” she said. “Our willingness to be transparent and make relationships with production companies led to other ‘branded content’ opportunities and also made taking our story and brand to the online environment an easy one because we already knew how to cede control.”

Adjusting the Flight Plan to a New Landscape

When she joined the communications department in 1992, only five people focused on external media relations. Today, it’s grown to 82 people. The department covers everything from internal and external communications to blogging and YouTube video. The landscape is constantly changing, she said, which means she and her staff have to adapt quickly to new, faster forms of communication such as Twitter and Facebook.

Anymore, she said, public relations specialists don’t have the luxury of responding to the media in a day, let alone a few hours.

“In a nutshell, PR is having to step up to the plate and be more accountable, creative, informative and speedy because journalism has changed dramatically with 24/7 news cycles, citizen journalists, sliding ethics and disappearing objectivity,” she said. “A deteriorating business model in traditional journalism has made it necessary for communications professionals to find creative ways to get the word out about the company/brand/product they work for.”

And don't forget to connect with the College of Mass Communications, on Facebook too!