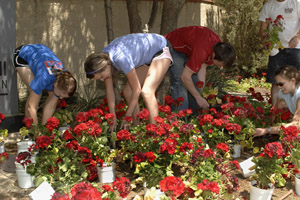 Texas Tech is currently featured on the NPC’s In the Spotlight page for its all-sorority fall 2009 GPA of 3.19. All of the university’s 11 Panhellenic sorority chapters boasted spring GPAs above 3.0.

Cate Bibb, assistant director in the Center for Campus Life, said Texas Tech is the first campus featured on the Web site. More than 650 campuses in the U.S. and Canada host NPC organizations.

“Within the Panhellenic community, scholastic achievement is a high priority,” Bibb said. “Members are expected and encouraged to focus on their academics and be leaders in the classroom, so we are excited to be featured on NPC’s Web site.”

The page highlighted a number of programs at Texas Tech, such as a Greek Scholar of the Month award that provides accolades – and free Starbucks – to a sorority sister deemed to have the highest GPA based on the demands of her major and her level of sorority involvement.

Incentives in individual chapters reward members with everything from gift cards for top test grades to Hershey’s Kisses for perfect classroom attendance.

“Texas Tech’s Panhellenic Council provides tips and strategies that encourage members to attend study hours and give awards to those who excel in areas including community service, risk management and scholarship,” said Brooke McDaniel, scholarship chair for Texas Tech's Panhellenic Council. “We continue to focus on the importance of academic achievement with new members and current sorority women and are pleased with all that our sororities continue to accomplish.”

To see the feature, visit NPC's In the Spotlight Web site.

Ten Professors Awarded For Going Above and Beyond

The Best of the Best: Parents Association Award Winners