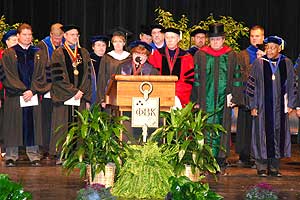 Phi Beta Kappa has chapters at only 10 percent of U.S. universities. Only three public universities in the state of Texas have been granted the right to host chapters.

Texas Tech’s Chapter of Phi Beta Kappa will induct 47 students into the distinguished honor society at 4 p.m., Friday, April 16 at the Lanier Auditorium in the School of Law.

Genevieve Durham, professor in the Department of Theatre and Dance, will be the keynote speaker.

Phi Beta Kappa has been in continuous existence since its founding in 1776 and is considered one of the nation’s leading advocates for excellence in education, particularly in the liberal arts and sciences. The society has chapters at only 10 percent of U.S. universities. Only three public universities in the state of Texas have been granted the right to host chapters.

“Having a Phi Beta Kappa chapter tells prospective faculty that Texas Tech is an institution whose commitment to excellence is proven and established,” said President Guy Bailey. “For our students, it means that every degree we grant is enhanced in value. It means permanent association with the very best in American education.”

The ceremony will last about an hour and will be followed by a reception in the law school Forum. Students, faculty, staff and the public are welcome to attend. Community visitors may park in the Law School R-21 parking lot at 18th Street and Hartford Ave.

Phi Beta Kappa President Honored br> Mary Jane Hurst was one of 42 faculty and administration around the country to be named an American Council on Education Fellow.

The Texas Tech Chapter of Phi Beta Kappa celebrates academic achievement, intellectual integrity, and scholarly excellence. Early in each spring semester, eligible junior and senior undergraduates are considered for election to the society. An invitation to membership is a high honor to be treasured throughout ones life.