With the help of Director Rob Sherwin, the School of Law advocacy teams have continued their tradition of winning. 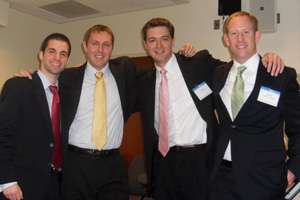 It was like a college football coach getting a chance to interview for a job at Notre Dame.

Two years ago, Rob Sherwin interviewed for his dream job of becoming the advocacy director at his alma mater, Texas Tech School of Law. He was interviewing at the request of the dean, Walter Huffman. If he got the job, he would be stepping into a role that had been held by a highly respected and successful Lubbock attorney who had been the advocacy coach for the last three decades. No pressure.

“Don Hunt coached and directed the advocacy teams for more than 30 years,” Sherwin said. “He was my moot court coach when I was a student here, and our new courtroom is named for him. Hunt had a winning legacy in moot court competitions. The shoes to fill were very large.”

“When Don Hunt tells you ‘I want you to interview for my job,’ and you have the opportunity to continue such an incredible legacy, you can't say no.” Sherwin landed the job, and he has continued the tradition of winning. Texas Tech’s law advocacy program was recently given the top ranking in the country in a national survey by the University of Houston.

Advocacy programs are all the competitions focused on practical lawyering skills.

“The idea is that you simulate being a lawyer in various types of courtroom situations and thereby cultivate lawyering skills. In a mock trial competition, students learn what it is like to try a case in front of a jury. In a moot court competition, the students learn how to make appellate arguments to a panel of judges. What makes it fun is that you compete in teams against classmates or other law students from other schools,” Sherwin said.

There are around 90 national competitions in a given year in all disciplines, about 70 of them in moot court, but Texas Tech does not compete in all of them. Many of the competitions are in particular subject matter areas, like entertainment law, international law, bankruptcy law and others. Some are sponsored by minority bar associations, such as the Black Law Student Association or National Latino Law Student Association. But in moot court and mock trial, there are really just a handful of major national championships to be won. 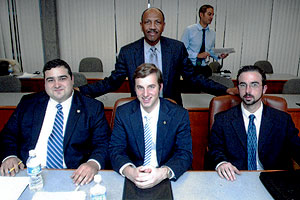 Sherwin explained that just like in boxing, there are many titles – three different organizations that say “this is the heavy-weight champion” – so there may be three different champs walking around, just with different belts.

Until recently, when the University of Houston added its ranking system and contest, there were two major contests in moot court: the National Moot Court Competition run by the New York City Bar Association and the National Appellate Advocacy Competition sponsored by the American Bar Association (ABA), both of which have regional and national components.

“Houston’s new Moot Court National Championship examines every team’s success over the course of a year and invites the top 16 teams to compete in Houston in late January,” Sherwin said. “Texas Tech’s team is basically the No. 1 seed in their Sweet 16.”

In addition, there are a number of other national competitions that Texas Tech chooses to compete in because of the size or type of competition. For example, Texas Tech competes at the national level in the ABA's Arbitration and Negotiations competitions.

“We believe that arbitration and negotiations skills are also very important for young lawyers,” Sherwin said. 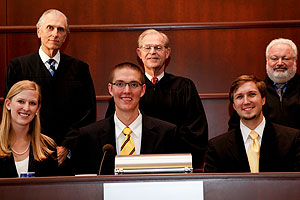 The 2009-2010 year has been another successful year for Texas Tech law competitors. National championships include the ABA Arbitration Competition and the National Latino/a Law Student Association Moot Court Competition.

Kate Cross, a second-year law student from Amarillo, said that one of the main reasons she came to Texas Tech was because of its advocacy programs.

“The advocacy programs at the school of law help prepare students to become attorneys by teaching them the skills required for both oral and written advocacy,” Cross said. “The school has a reputation as being the best, and I am grateful to be a part of this program.”

This year Texas Tech fielded 27 national teams in various disciplines: 15 in moot court, seven in mock trial/arbitration, four in negotiation and one in client counseling, with 66 different students taking part in those teams.

“That amounts to just more than 10 percent of our total student body, or nearly 16 percent of our second- and third-year students,” Sherwin said. “We only allow upper-level students to compete on our national teams.”

"Most other law schools don’t give underclassmen the experience of competing, which may be one reason our students do so well when they do advance to their second and third years," Sherwin said.