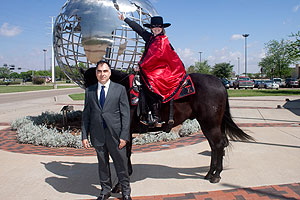 Hussein Al-Uzri, a 1985 graduate of the Department of Electrical and Computer Engineering, is now at the helm of Iraq’s largest bank.

The post-Saddam rubble of Iraq may not have seemed like fertile ground for growing a thriving trade bank.

Yet Hussein Al-Uzri had no hesitations about returning to his homeland when the opportunity presented itself in 2003. He returned to a country with an economy hamstrung by United Nations sanctions and sapped by decades of warfare.

Today, the 1985 graduate of the Department of Electrical and Computer Engineering is chairman and president of Iraq’s largest financial institution.

The Trade Bank of Iraq, established to facilitate government trade with outside nations, now has $100 million in capital and $6.1 billion in total assets. The government-owned but independent bank serves as a catalyst for economic regeneration in the cash-strapped nation.

“There were banks in Iraq, substantial banks, but because of the sanctions, they were cut off from the rest of the world,” Al-Uzri said. “So the start wasn’t easy, but we were able to pick up fast and achieve great results.”

The Road to Recovery

During an April visit to Lubbock for a tour of his alma mater, Al-Uzri described a nation that is beginning to flex long-dormant economic muscles.

Security is improving and Iraqi salaries are increasing.

“In general, the life of the average Iraqi has improved over recent years,” he said. “We are beginning to taste wealth that we have been deprived of, and Iraqis are looking forward to getting jobs and normal living.”

“Iraq always had great potential. It has the world’s second-largest oil reserve, great human resources and other resources such as water, which in that part of the world is not in abundance. We have all these resources that should help make Iraq a much richer place.”

Prior to joining the Trade Bank of Iraq, Al-Uzri served as a managing director at Card Tech, a major emerging markets financial information technology and consulting firm and spent 10 years in Moscow managing that firm’s activities in Russia. 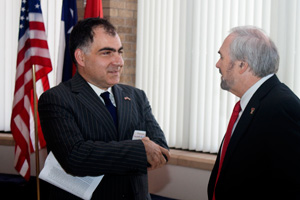 Al-Uzri came back to Texas Tech in search of solutions for rebuilding one of the world’s oldest education systems.

He visited Lubbock after attending a roundtable discussion in Washington D.C. hosted by the National U.S.-Arab Chamber of Commerce (NUSACC) and Meridian International Center.

“It was an excellent discussion from various parts of your government,” he said. “I saw that there is quite a lot of good support for Iraq. We see now that the relationship is normalizing, and the U.S. will have a major role to play in re-establishing a proper economy and improving services.”

And after exploring how the U.S. will be involved in Iraq’s economic recovery, Al-Uzri visited Texas Tech in search of answers for rebuilding one of the world’s oldest education systems.

While in Lubbock, he met Jambally Mohammed, a Fulbright Grant scholar from Iraq, and heard about other Iraqi students who soon could be enrolled at Texas Tech.

He pointed out that Mesopotamia, commonly known as the cradle of civilization, was also home to many fields of math and science. He said he hopes the U.S. can train Iraqi professors and provide technology and resources to help strengthen Iraq’s universities.

“We need to return our universities to the point where they are worldwide universities,” he said.

However, Al-Uzri also said he enjoyed the opportunity to see how the campus has expanded over the last 25 years. He said he has kept up with the university and still follows the Red Raiders.

He said he was thrilled when he saw the team ranked second nationally during the 2008-2009 season.

“It has always been my dream to come back to Lubbock, to Texas Tech, and see the great development that has happened here,” he said. “The influence that Texas Tech has had on me throughout my journey, from graduation until now, has been great. I learned and experienced a lot here, and I hope I can help my fellow countrymen gain this experience.”