Janet Pérez has been honored by Sigma Delta Pi, the National Hispanic Honor Society, for her service in Hispanic scholarship. 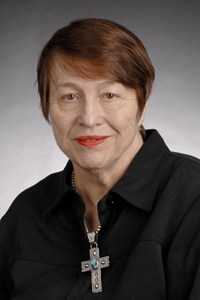 Pérez will receive one of the highest honors awarded by Hispanic honor society Sigma Delta Pi on April 29.

The Texas Tech Alpha Phi chapter of Sigma Delta Pi, the National Hispanic Honor Society, has announced that a Horn Professor of Spanish has been awarded the Order of Don Quijote.

Janet Pérez, Qualia Chair of Spanish in the Department of Classical & Modern Languages & Literatures, was honored by Sigma Delta Pi for her exceptional and meritorious service in the fields of Hispanic scholarship, the teaching of Spanish and the promotion of relations between English- and Spanish-speaking countries.

In addition to teaching Spanish language and literature, Pérez served as the editor of Hispania, the academic journal of the American Association of Teachers of Spanish and Portuguese, for the term limit of nine years.

Since coming to Texas Tech in 1977 as a visiting professor from the University of North Carolina at Chapel Hill, Pérez has established herself as a distinguished faculty member. She was the first female faculty member in the College of Arts and Sciences to receive the Barnie E. Rushing, Jr. Faculty Distinguished Research Award, and has been elected to full membership in the Academia Norteamericana de la Lengua Espanola, the highest honor available in Spanish language and literatures.

The Order of Don Quijote is one of the highest honors conferred by Sigma Delta Pi. Pérez has been a member of the honor society since 1964.

The induction ceremony will take place at 6:30 p.m. April 29 in room 001 of the Education Building. The public is welcome to attend and a reception will follow.