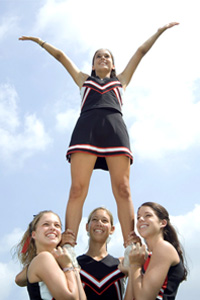 The state should educate coaches and athletic directors to recognize the signs and symptoms of performance-enhancement drug use, then create a protocol for them to report their suspicions.

Though random high school steroid testing in Texas may disappear after this academic year because of costs, an expert in sport management said the state should continue testing, but find more efficient ways to use funds.

John Miller, an associate professor in the Department of Health, Exercise & Sport Sciences, recently authored the chapter “Drug Issues in Sport: Steroid Performance-Enhancement” in the book “Sport and Criminal Behavior” by Lee and Lee.

Responses from his research indicated that cheerleading had more potential for steroid use than other sports because of the physical nature of the sport. Miller said performance-enhancing drug use is here to stay until a message can get out to curb the use.

Recently, the Texas Education Agency proposed to cut the $1 million budget for the state’s random steroid testing program. Miller said the state should educate coaches and athletic directors to recognize the signs and symptoms of performance-enhancement drug use, then create a protocol for them to report their suspicions.

“If coaches suspect an athlete using steroids, then they could report it and leave it to the UIL (University Interscholastic League) to investigate – a similar method as the NCAA,” Miller said. “This would have the potential of using the money allocated by the legislation more effectively.”

Cutting the program’s funding became a debate after it produced 19 positive steroid tests out of more than 45,000 samples.

However, Miller said a recent poll by the University of Michigan’s C.S. Mott Children’s Hospital found nearly one in 10 parents of high school athletes were aware of the use of performance-enhancing drugs by an athlete in their community, and 75 percent of parents supported random drug testing within the schools.

“Though the steroid-testing program results were low, that doesn’t mean that steroid abuse isn’t happening,” he said. “By empowering and educating coaches to recognize steroid abuse in their athletes, the state could better use testing funding to test suspected abusers.”

He found about 60 percent of coaches think random drug testing should be conducted in high schools. Also, he found 33 percent of athletic directors had suspected their athletes using steroids, and other coaches were not knowledgeable enough to press the issue or simply did not report the use of performance-enhancement drugs.

“Many coaches can educate athletes about the dangers of recreational drugs, including alcohol, but often cannot do so for steroids for a variety of reasons,” he said. “In some cases, it may be because they don’t want to know. For others, it may be the result of not being offered the opportunity for steroid education.”

Not Lost in Space: Professor Recovers Data from Apollo Missions