The Most Subversive Movie Ever Made? Public Invited to Weigh In

Before 'Salt of the Earth' was released in 1954, it was deemed so destructive that it landed on a blacklist. 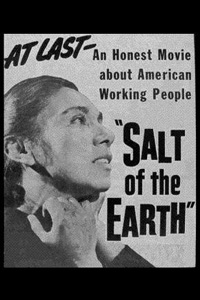 “Salt of the Earth” was blacklisted for being one of the first movies to advance the notion of gender and racial equality.

There’s no sex. No violence. In fact, with its uplifting message and promotion of equality, “Salt of the Earth” may seem like pretty typical feel-good fodder to today’s moviegoer.

Yet before it was released in 1954, the movie was deemed so subversive that it landed on a blacklist. Its actors and director suffered through death threats, government surveillance and even deportation.

So why did the movie become one of the most transgressive filmed on U.S. soil? The Lubbock community is invited to attend a free screening and roundtable discussion from 6-9 p.m. March 31 in room 101 of the Mass Communications Building.

“Salt of the Earth” tells the story of miners who go on strike to gain equal wages for their Mexican-American coworkers. Based on true events and starring many of the people who took part in the strike, it also was one of the first movies to advance the notion of gender equality.

Yet in a nation gripped by McCarthyism, such messages came across as communist propaganda, said Rob Weiner, an associate humanities librarian for the university library and roundtable panelist. Howard Hughes once petitioned Congress to stop production, Weiner noted.

“One could argue that it is one of the most persecuted movies ever made,” he said, “and yet the basic message is that everyone’s equal, people deserve decent working conditions and we need to treat each other with respect.”

The event is presented by the library and the Department of Electronic Media and Communication in the College of Mass Communications.

After the screening, panelists will discuss issues including how concepts of social justice changed in the last 60 years, and whether this movie still resonates in 2010.

Following the film, each panelist will speak for five minutes before the audience is invited to respond.