The National Parliamentary Debate Association Championship is the largest intercollegiate tournament in the nation. 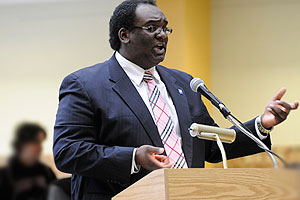 Brian Horton, pictured, and his partner, Adam Testerman, are currently ranked second in the nation.

Texas Tech’s team of Brian Horton, a senior from San Angelo, and Adam Testerman, a junior from Springfield, Mo., will be in strong contention for the national championship. They are ranked second in the nation.

From across the country, 220 debate teams from 75 schools are anticipated to attend the tournament and debate various topics, which include foreign policy, domestic politics and philosophical perspectives.

The NPDA Championship Tournament has been the largest intercollegiate debate tournament in the United States for the past 11 years. The students will debate in parliamentary style, a unique format where students are given a topic and have 20 to 30 minutes to prepare their arguments.

Other events to occur during the national tournament include an exhibition debate between top American debaters and Irish national debate champions at 4:45 p.m. on March 19 at the Holiday Inn Hotel and Towers, and preliminary debates on March 20-21 at the Student Union Building. The final round will be at 6:30 p.m. on March 22 at the Lubbock Memorial Civic Center. All events are free and open to the public.

Texas Tech debate is housed in the Department of Communication Studies. For more information on Texas Tech debate, contact Director of Forensics Joe Gantt at (806) 742-1328.