Researchers hope to solve some of the universe’s most mind-blowing riddles. 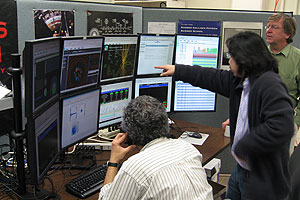 Scientists achieved major success, with help from a team of Texas Tech physics researchers, with the world’s largest particle collider beneath the Jura Mountains near Geneva, Switzerland.

According to organizers at the European Organization for Nuclear Research, known as CERN, scientists were able for the first time to make two proton beams collide at 7 teraelectron volts Tuesday. If all goes according to plan, the beams will collide at this level for 18 to 24 months.

Texas Tech has supplied many of the calorimeters for this project, said Nural Akchurin, a professor of physics and a calorimeter project manager at CERN. Texas Tech’s High Energy Physics Group has worked on the project for 18 years, he said.

These calorimeters will serve as the catcher’s mitts that they hope will capture proof of a theoretical particle called a Higgs boson. Higgs is thought to be responsible for giving mass to subatomic particles, which make up atoms and so-on until you have a pencil, a rock or a table.

“In the most vanilla version of the Higgs theory, you need some mechanism through which you give mass to electrons and protons,” he said. “Finding that mechanism could close the loop in assigning known masses. If you have Higgs, you can explain everything – or nearly most things.”

Simply put – but perhaps too simply – these scientists hope the $10 billion Large Hadron Collider and Compact Muon Solenoid will extend our understanding of matter’s smallest building blocks and reveal how they acquire mass. They also hope to answer many other questions about the universe.

“If this project finds nothing but Higgs, that’s huge,” Akchurin said. “If this experiment finds nothing at all, I think that’s equally as big a deal because we’ll have to rethink all these other theories. Whatever comes out of this will be interesting.”