Justice Eva Guzman will speak on her success from Chicago to Texas at 7 p.m. March 26. 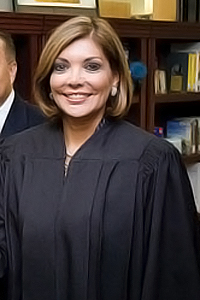 In 1999 Guzman was appointed to the 309th District Court of Harris County where she served as a trial court judge for almost three years. Gov. Rick Perry appointed her to the Houston-based Texas 14th Court of Appeals in 2001. Since then, she has ruled on more than 2,000 civil and criminal appeals and original proceedings and authored hundreds of published opinions.

Guzman was appointed by Perry to the Supreme Court of Texas in 2009. This year the Hispanic National Bar Association honored Guzman as Latina Judge of the Year.

Cocktails will be served at 6 p.m. and the dinner and program will begin at 7 p.m. General admission tickets are $25, faculty and staff tickets are $30, student tickets are $20 and HLSA member tickets are $15. To purchase tickets, contact Marissa Lozoya at marissa.lozoya@ttu.edu.