With devilish horned ridges above each eye, Crocodylus anthropophagus probably waited patiently for hominid prey to come a little too close to the water’s edge. 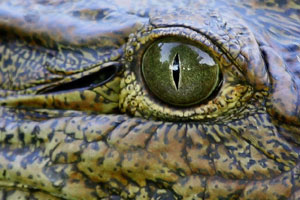 It stalked the waters of Africa’s Olduvai Gorge about 2 million years ago.

With devilish horned ridges above each eye, Crocodylus anthropophagus probably waited patiently for prey to come a little too close to the water’s edge before snapping its huge jaws on its victims and sealing their doom.

Now, a Texas Tech professor says this crocodile occasionally robbed from the cradle of mankind. Lou Densmore, interim chairman of the Department of Biology, said Crocodylus anthropophagus appears to have dined on early human ancestors.

“This croc was probably a little bit larger than the Nile crocodile,” Densmore said. “Five meters (16.4 feet or more than two times the height of the average male) would not be out of the question.”

Densmore contributed to a recent study led by Chris Brochu, an associate professor in the Department of Geosciences at the University of Iowa. Their findings appeared in the Feb. 24 issue of the journal "PLoS ONE" (Public Library of Science). Read the article here.

Joke for a Name

“I remember when Chris sent me the first draft, he said ‘I think we should name it anthropophagus. Do you think people will get the joke?’ I said ‘I think they’ll get the joke. I think it’s a pretty good idea.’ Clearly, we don’t think this crocodile’s primary diet was hominid. But fossil evidence shows hominids and crocodiles encountered each other.”

The startling dietary evidence was discovered while Brochu and his collaborators were reconstructing the evolutionary history of Africa’s crocodiles.

“Hominid bones from Olduvai-area rocks of the same age as C. anthropophagus show bite marks interpreted as coming from a crocodile,” Brochu said. “As far as we can tell, there was only one crocodile living in that area at that time. I wasn't especially interested in how these crocodiles interacted with human ancestors. Much of that angle was contributed by our co-authors Jackson Njau at the National Natural History Museum in Tanzania and Robert Blumenschine at Rutgers University. They have been studying the paleo-ecology of hominids in Olduvai Gorge for many years.

“To me, a primate is a primate. I work on things that eat primates.” 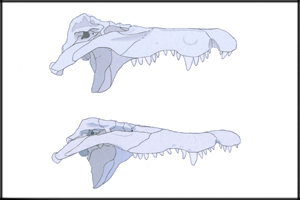 The Crocodylus anthropophagus (pictured first) had horned brows above its eyes, giving it an evil look, and was slightly larger than its relative, the Nile Crocodile (pictured second). Image provided by Chris Brochu.

Brochu originally thought that the fossilized crocodile remains would be the same as the Nile crocodiles found in East Africa. However, after close inspection of the horned brows over each eye and other differences, the researchers determined it was a separate species.

“Much of the work that Chris has done was to figure out which crocodile this animal was most closely related to,” Densmore said. “It looks like it was most likely related to the Nile crocodile. Before, there was a possibility that this animal was just a distinct population of Nile crocodiles. But we don’t think so. There are enough different characteristics that appear to make this a unique species.”

That surprised researchers because, although crocodile diversity was higher in Africa up until the start of the Ice Age 2 million years ago, most scientists assumed croc diversity nosedived with the onset of a cooler world, Brochu said.

“That diversity remained relatively high as recently as 1.8 million years ago was a real surprise,” he said.

Densmore, whose expertise lies in studying genetic and molecular differences in modern crocodiles, was involved in the research primarily because of the importance this work might have for understanding modern crocodile diversity in Africa.

He said there’s growing evidence that the modern, wide-ranging Nile crocodile may actually represent two or more independent but similar-looking species. No one has looked to see if all the Nile populations with differing body types are also genetically different.

“Adding fossils to the analysis increases our abilities to address both issues,” Brochu said. “It’s been primarily through collaboration with Lou and his students that we’ve been able to take this work to the next level, integrating information from the fossil record with information from living crocodiles.”

Densmore will continue his collaboration with Brochu to work on still more crocodilian fossils from Africa that are 5 to 7 million years old to determine if they might be a close relative of the crocodiles currently living in the Caribbean. Also, the researchers will study a truly giant crocodile that might have exceeded 26 feet in length.

Not Lost in Space: Professor Recovers Data from Apollo Missions