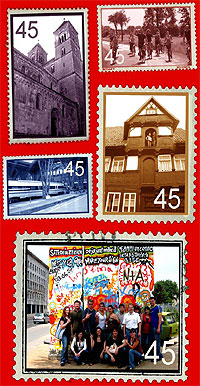 At Texas Tech Quedlinburg students immerse themselves in German language and culture in a town of about 20,000 people in the middle of Germany

Quedlinburg is a rural, medieval town in what was once East Germany. Now it's also Red Raider country.

Texas Tech has had an academic presence in Western Europe for decades; first in Vienna, Austria, and then, following the fall of the Berlin Wall, in Wust, Germany, a village of about 300 people near West Berlin. After several visits with a colleague in Quedlinburg, Meredith McClain, professor of German and organizer of the German study abroad programs, had a revelation.

“It dawned on me this is the one and only place for the kind of study abroad program I was becoming devoted to,” said McClain. “In the fall of 2005, my teaching assistant Hillah Culman and I set up residence in Quedlinburg in a magnificent half-timbered villa that was built in 1576 and restored in 1994 to a state-of-the-art public building.”

Students can complete Texas Tech’s four-semester foreign language requirement in just one 16-week semester spent in Quedlinburg. Intermediate and advanced courses, including an internship, also are offered. Students can choose from course offerings in the fall or spring semesters in addition to shorter sessions during the summer. Program enrollment varies, with about 15 students expected next fall.

“Students study nothing but Germany while they are here,” McClain said. “Classes are over at noon on Thursdays, leaving time to travel around Europe to compliment their learning experience.”

Students live with host families carefully selected by McClain and even more carefully matched to the students. It’s a feature of the program that leaves a lasting impact on most students.

“Living with my host family was maybe the most rewarding part of studying abroad,” said Nick Henry, currently a visiting instructor in German at Texas Tech. “Culturally, it was a real eye-opener. My host family did not fit the mold of the stereotypical German family. My host mom was a vegetarian, so we didn’t eat many typical German dishes. She was also a single mom who worked outside the home. The experience of living with them was the foundation for the class I taught last semester.”

Henry’s is a story shared by the majority of the students in the program. While his host family has now moved from Quedlinburg and he hasn’t seen them in a while, for other students, the relationship remains very close.

“I think the best and most beneficial thing I took from my experience in Germany is the ongoing relationship with my German family,” said Larissa True, a graduate student in exercise and sports science. “They have been to America twice to see me and I’ve gone back to Germany twice since my study abroad semester to visit them. I’m planning my next trip for May. The first time I went back, my mom got to come with me and see where I lived and went to school. We also send regular e-mails and letters in German so I can keep up the language.”

For Henry, Quedlinburg was a turning point in his life. He had finished his bachelor’s degree in German in two and a half years and was contemplating what to do next.

“I was 20 years old and had no clue about what I wanted to do for a career,” he said. “I was working as a mentor in the Honors College and decided Quedlinburg would give me a chance to do graduate work, get more teaching experience and maybe start an academic career.”

His time in Germany led to two master’s degrees and a doctorate in German applied linguistics.

Classes are over at noon on Thursdays, leaving time for students to travel around Europe to compliment their learning experience.

McClain is working to expand Texas Tech’s offerings in Quedlinburg. Already the School of Music offers a five-week performance course for select students. In the summer of 2011, John Hollins, an assistant professor in the School of Music, will bring the Lubbock Chorale plus an instrumental ensemble for a concert tour of Quedlinburg, Leipzig, Dresden and Berlin.

“In March 2007 I visited the TTU Center in Quedlinburg and immediately began to dream about the possibilities for establishing a connection and involving our students from the School of Music, a vision that is offering an amazing experience for our singers,” Hollins said.

For Hollins, whose expertise is in voice, choral music and opera, the opportunity is a dream experience for his students. He points out that many Texas Tech voice students will pursue careers in German and other European opera houses following Techsans already established there.

“I want students to learn and perform in this part of Germany,” he said. “Our students generally do not receive the kind of attention, appreciation and acute listening from audiences at home. To sing for audiences that are captivated and that are truly absorbing every note, word and phrase is also life-changing and tremendously impacts the artistry of our students.”

“I know Mayor Brecht and city officials believe we are a bright entrepreneurial opportunity,” McClain said. “They welcome our students and honor them. Our host families really bond with the students, sometimes travelling to the United States to visit them. And our students and their parents have returned to Quedlinburg to visit their hosts.”

“Of course there are some negatives to studying abroad – such as a lack of good Tex-Mex food – but I found that they were far outweighed by the positives." Henry added. "I learned a lot about other people and cultures. I broadened my view of what it means to be a citizen in a globalized community.”

From culinary classes in Florence, to Range and Wildlife Management in Australia, from language study at one of the Texas Tech Centers to Engineering in Czech Republic, Texas Tech has more than 500 programs in 83 countries that TTU students can participate in. For more information on the Texas Tech Center in Quedlinburg or other study abroad options from Quedlinburg, Germany to Seville, Spain or any one of dozens of other cities, visit the study abroad Web site.

Exhibit Showcases Study Abroad Experiences
The juried exhibit features photographs taken by students studying abroad on a variety of subjects from around the world.

Study Abroad Program Could Produce New Architecture Institute in Nicaragua
Students work with Nicaragua's Minister of Tourism to conceptualize a new private art and architecture institute in a war-torn district of Granada.