School of Music Presents Political Satire Fit For the Gods

“Orpheus in the Underworld,” best known for the music of the “Cancan,” is a full-length operetta featuring the flavor of the university and the South Plains. 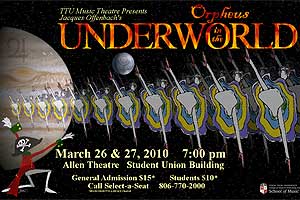 Jacques Offenbach’s “Orpheus in the Underworld” will be presented by the Music Theatre at 7 p.m. on March 26-27 in the Student Union Building Allen Theatre.

“Orpheus in the Underworld,” best known for the music of the “Cancan,” is a political parody and a full-length operetta featuring the flavor of the university and the South Plains. It is directed by Gerald Dolter and conducted by John Hollins.

The musician Orpheus is unhappily married to Eurydice, who is having an affair with Aristaeus, otherwise known as Pluto, god of the underworld. When Eurydice leaves Orpheus to join Pluto, Orpheus is free to pursue his love of the violin. With the help of Jupiter and other Roman gods and goddesses, Orpheus is forcibly escorted to Pluto’s realm, where an eternal party is underway.

“The show is a complete lampoon poking fun at ourselves as we make our way through this world,” Dolter said. “It’s a modernized version. All of the characters in the show are people you’ve seen on television or in the news. It was originally written to be a comedy that pokes fun at the aristocracy. But we poke fun at everybody.”