John D. Alexander stands at the helm of the 1,092-foot-long USS Abraham Lincoln. 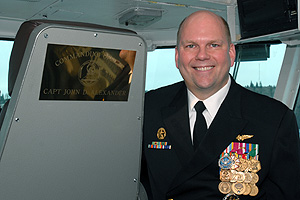 Before taking command of the USS Abraham Lincoln, Alexander served as executive officer of USS Dwight D. Eisenhower and as head of aviation commander assignments at Navy Personnel Command.

A Texas Tech alumnus is now the captain of a Navy aircraft carrier that is roughly half the size of his hometown.

Capt. John D. Alexander, a native of Port Neches, took over in January as commanding officer of the USS Abraham Lincoln during a ceremony on board the ship.

"I am very humbled and excited to be on board the Lincoln," said Alexander. "The ship looks great, and the crew is highly motivated. I'm proud to take command of this extraordinary warship."

The Life of a Sailor

When the USS Abraham Lincoln is in port, Alexander's day usually begins at 6:30 a.m. and ends around 6:30 p.m. Everything he does while the ship is in port is in preparation for deployment. On the other hand, at sea, the workday is 24 hours. There are people up and working every hour of every day.

"If planes are taking off and landing on our flight deck," Alexander said, "I’m awake and on the bridge. If we’re transferring fuel or ammunition, launching weapons or navigating close to land, I’ll be on the bridge."

The carrier has 19 separate departments, each with their own officer in charge. It’s Alexander's job to form these departments into a cohesive team and guide everyone toward a common goal. Alexander said the most difficult part of his job is making sure everyone on board understands the primary goals and priorities.

"It’s a delicate balance between mentoring more than 200 officers and allowing them to be autonomous, while at the same time ensuring we’re all striving toward a common goal."

The crew usually follows a 24-month cycle of maintenance, training and deployment. During that time, the crew will be home half the time and deployed the other half. The crew starts out doing maintenance and training the new crewmembers, and then culminates in overseas deployment as part of a carrier strike group. 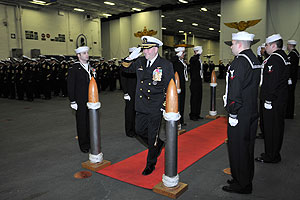 Alexander takes command of the USS Abraham Lincoln in a change of command ceremony on board the ship.

Alexander's mechanical engineering degree and time at Texas Tech was crucial to his Navy career. He initially used it during his aviation indoctrination courses, when he studied engines and flight dynamics. Also, he found his degree useful during his flight training to understand operating and weapons systems on the aircraft, and during nuclear propulsion training.

During his time at Texas Tech, Alexander was involved with many student organizations. He was the Student Association Vice President for External Affairs his senior year. He also doubled as the editor-in-chief of "The Word" magazine and wrote the cover article on the space shuttle Columbia for the 1981 fall semester publication. In addition, he was a member of Sigma Chi fraternity, a member of Pi Tau Sigma, the international mechanical engineering honor society, and also was an Alpha Delta Pi Little Brother.

While his school work was important to him, his favorite memory from Texas Tech was meeting his future wife.

"She was an education major, and a member of Alpha Delta Pi. We've been married 26 and a half years, and she has been a huge supporter of my naval career."

"I was accepted on an aviation contract and was trained as a naval flight officer (NFO). A NFO is not a pilot. My vision did not meet the minimum standards to be a pilot. I received basic flight training before being selected for Bombardier/Navigator training."

Before taking command of the USS Abraham Lincoln, Alexander served as executive officer of USS Dwight D. Eisenhower and as head of aviation commander assignments at Navy Personnel Command. Alexander said he is ready to lead the crew of the Abraham Lincoln and follow in the former captain's footsteps.

"I had always wanted to join the Navy and fly jet aircraft. It was a dream come true to be accepted. I am truly fortunate to have had a 27-year naval career that allowed me to command both an EA-6B squadron as well as two ships, the latest being the USS Abraham Lincoln."

Of course, there are a few things that are unusual for a city of 5,000 people. For example, Abraham Lincoln is a floating airport. The 4.5 acre flight deck is capable of launching as many as four aircraft every minute.

When deployed, Abraham Lincoln is the nucleus of a carrier battle group which includes guided missile cruisers, destroyers, frigates, replenishment ships, and submarines.