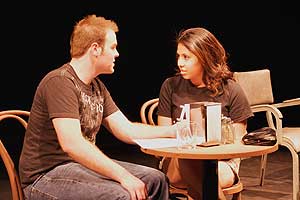 Blane Womack and Tamara Prospero star in "Moral Compass," one of the six original plays completely produced in every aspect by students, centers around a DEA agent that regrets a decision to terminate a woman.

The Department of Theatre and Dance will present its annual “Raider Red’s One-Act Play Spectacular (RROAPS)” beginning March 29 and running through April 4 in the Lab Theatre. All performances are at 8 p.m., excluding the Sunday matinee which begins at 2 p.m.

"'RROAPS' is special in that it fosters the birth of six brand-new plays," said Shannon Hurleigh, a graduate student in the arts administration program and this year’s producer. "It is somewhat unique having a forum where a playwright can watch their work come to life in rehearsal, or for a director to have immediate access to a playwright."

Approximately 52 graduate and undergraduate students are involved in this year’s production, with first-year students working side-by-side current Ph.D. students in a collaborative process that fosters both personal and professional growth and learning.

“We pride ourselves on our performances of original plays completely produced in every aspect by students. All those involved get a great amount of experience in collaborating, which is essential in the practice of theatre,” Hurleigh said.

This year’s lineup of one-act plays features something for all audiences.

School of Music Presents Political Satire Fit for the Gods