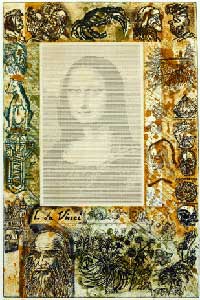 Rudy Pozzatti's "Homage to da Vinci" is one of many art selections showcased in the exhibit.

ColorPrint USA, an experiment begun by retired Texas Tech art professors Lynwood and Eleanor Kreneck, has evolved into a recurring event showcasing original prints and celebrates its 40th anniversary with an exhibit of works gathered over the years.

The exhibition commemorates the foresight of the Krenecks and their enthusiasm toward presenting contemporary art to our region’s audiences, while promoting the creative persistence of American printmakers.

The ColorPrint USA 40th Anniversary exhibition opens March 7 in Gallery 3 at the Museum of Texas Tech. The exhibition will run through May 9.

“The origins of ColorPrint USA were simple and straightforward. It was 1968, and my wife Eleanor and I sat around the kitchen table and dreamed about it,” Lynwood Kreneck said. “It was intended simply to be a competitive show that would bring the work of outstanding artists making prints to Lubbock … not reproductions, but the actual art works whose presence could generate a lasting influence and spur independent thought. It would be a fountain of ideas and an entry into worlds outside our local boundaries.”

“This is a modest representation of the more than 700 artists whose works have been included in CPUSA shows since their inception in 1969,” said Peter Briggs, the museum’s Helen DevVitt Jones curator of art. “I will never fully understand the range of altruistic responses of the many print makers who donated their works of art to the Museum. During the last four years I anxiously solicited donations of prints. Not one artist refused.”

All of the 65 pieces of art on exhibit are in the museum’s ColorPrint USA collection. They represent works from the late 1960s to the early 2000s. The diversity of the art works featured showcase the individual creative efforts put forward by the more than 700 artists who participated in ColorPrint USA during the last 40 years.

For more information or to request special assistance while visiting the museum, e-mail the Education office or call (806) 742-2432.