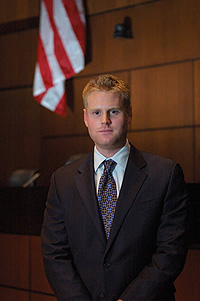 As the award recipient, Beck will receive an all-expense paid trip to the annual induction ceremony in Washington, D.C.

A Texas Tech law student was selected by the American College of Bankruptcy as a 2010 Distinguished Law Student.

A Bedford native and a third-year law student, John Beck was chosen as the Fifth Circuit recipient. The Sixth, Seventh, Eighth and Tenth Circuits also chose their distinguished law students for 2010. The First, Second, Third, Fourth, Ninth and Eleventh Circuits will select students in 2011.

Students must be nominated by either a college fellow or their professors. The nomination must also include the student’s written materials and additional letters of recommendation. Each nominated student must have outstanding academic credentials and an interest in bankruptcy law. Nominees are then considered by their circuit council, which selects one student from each circuit. The winners receive an all-expense paid trip to the college’s annual induction ceremony and events in Washington, D.C., where they have the opportunity to meet the most distinguished bankruptcy practitioners and judges in the country.

The induction ceremony and events will take place March 12 and 13 at the U.S. Supreme Court in the Great Hall, and will be presided over by David G. Heiman, chair of the college. The keynote speaker will be Harvey R. Miller of Weil, Gotshal & Manges LLP in New York City.

The American College of Bankruptcy is an honorary professional and educational association of bankruptcy and insolvency professionals. The college plays an important role in sustaining professional excellence.