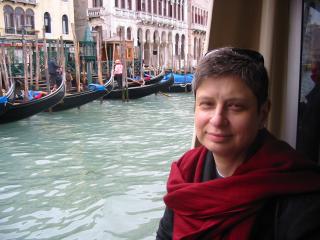 Khrushcheva is a member of the council on foreign relations and her articles have appeared in various national and international publications.

The Office of International Affairs will host Nina L. Khrushcheva, granddaughter of former Soviet leader Nikita Khrushchev, at 5:30 p.m. on Thursday, April 8, in the auditorium of the International Cultural Center.

Associate professor in the graduate program of International Affairs at The New School, Khrushcheva will speak on the current political situation in Russia. The speech is titled “The Byzantium Influence on Russian Modernity.” The presidencies of Putin and Medvedev also will be discussed.

Krushcheva is senior fellow of the World Policy Institute as well as an editor of and contributor to Project Syndicate. She received her doctorate from Princeton University where she worked for two years as a research fellow for the School of Historical Studies of the Institute for Advanced Study. She then served as deputy editor of East European Constitutional Review at the New York University School of Law.

Khrushcheva is a member of the Council on Foreign Relations and her articles have appeared in various national and international publications. She is the author of “Imagining Nabokov: Russia between Art and Politics,” and is currently working on a new book project, "Russia’s Gulag of the Mind.” Connect with her on Facebook.

The lecture is also sponsored by the CH Foundation, the Russian club and the History and Political Science Departments. It is free and open to the public. For more information, contact Erin Collopy at (806) 742-3145.

Exhibit Showcases Study Abroad Experiences
The juried exhibit features photographs taken by students studying abroad on a variety of subjects from around the world.