An unlikely story of respect, character, humor and ultimately friendship as the teammates pulled together to succeed in a game they loved. 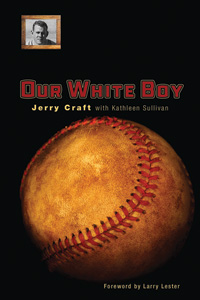 When summer break began in 1959, then-Texas Technological College senior Jerry Craft had no more enticing options than to stay home and help on the family ranch so the telephone offer to play for a semipro baseball club came as a welcome surprise.

Since he had never heard of the club, Craft was in for a big surprise when he reported for tryouts and discovered he’d been recruited for the West Texas Colored League.

Craft’s experience as the first white man to play in the league was tagged by the Dallas Morning News in 1998 as “Jackie Robinson in reverse.” Craft, a rancher and businessman in Jacksboro, tells his story through a memoir, “Our White Boy,” out this spring by Texas Tech University Press (TTUP).

Looking back on those years before the civil rights movement, Craft relates an unlikely story of respect, character, humor and ultimately friendship as the teammates pulled together to succeed in a game they loved.

The book, along with “Playing in Shadows: Texas and Negro League Baseball” by Rob Fink, launches TTUP’s book series "Sport in the American West." Edited by Jorge Iber, the new series examines the impact of team sports throughout the region and seeks to illuminate how they intersect historically with such cultural issues as race, ethnicity, gender and class.

Jerry Craft, former mayor of Jacksboro and a pioneer in the national cable television industry, operates ranches in Texas and New Mexico.

Kathleen Sullivan, who holds degrees from Baylor University and Arizona State University, is a member of the Sport Literature Association and the Society for American Baseball Research. She is also the author of reviews and articles on sport literature and “Women Characters in Baseball Literature: A Critical Study.” She lives in Arlington.

Larry Lester is co-chairman of the Negro Leagues Committee for the Society for American Baseball Research.