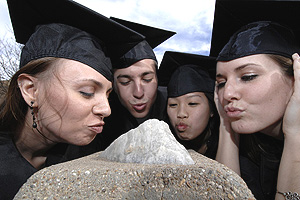 Graduates pucker up to receive the gift of eloquent speech from Texas Tech's very own Blarney Stone.

Beyond the passageway of the Electrical Engineering Building sits a stone upon a stand. Students pass the monument daily, but few read the inscription on this small piece of clout and tradition at Texas Tech – the Blarney Stone.

According to local lore, the stone was found March 7, 1939, by a group of petroleum engineering students on a field trip. Further investigation would prove it was identical to a piece of the original Blarney Stone, which disappeared from Blarney Castle near Dublin, Ireland, in 1659.

Because the stone was found shortly before St. Patrick’s Day, students seized the special opportunity to honor St. Patrick, the patron saint of engineers. To mark the day, the engineers dedicated the monument and all engineering students were dismissed from classes for the occasion.

Dosh McCreary, then-president of the Engineering Society, announced that, upon graduation, engineers who kiss the Blarney Stone would thereby receive the gift of eloquent speech. He further added that only seniors would be allowed to kiss the stone and underclassmen would pay it the greatest of respect. The tradition continues today. 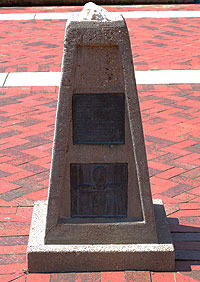 Red Raiders don't have to make the trip to Ireland for the gift of eloquence. Photo by Jonathan Beltz

For more than 200 years, world statesmen, literary giants and legends of the silver screen have joined the millions of pilgrims climbing the steps to kiss the Blarney Stone and gain the gift of eloquence. Its powers are unquestioned but its story still creates debate.

Some say it was Jacob’s Pillow, brought to Ireland by the prophet Jeremiah. Here it became the Lia Fail or "Fatal Stone," used as an oracular throne of Irish kings – a kind of Harry Potter-like "sorting hat" for kings. Legend says it was then removed to mainland Scotland, where it served as the prophetic power of royal succession, the Stone of Destiny.

When Cormac MacCarthy, King of Munster, sent five thousand men to support Robert the Bruce in his defeat of the English at Bannockburn in 1314, a portion of the historic stone was given by the Scots in gratitude and returned to Ireland.

Others say it may be a stone brought back to Ireland from the Crusades – the Stone of Ezel behind which David hid on Jonathan’s advice when he fled from his enemy, Saul. A few claim it was the stone that gushed water when struck by Moses.

Whatever the truth of its origin, we believe a witch saved from drowning revealed its power to the MacCarthys.

Once upon a time, visitors had to be held by the ankles and lowered head first over the battlements. Today, the stone itself is still set in the wall below the battlements. To kiss it, one has to lean backwards (holding on to an iron railing) from the parapet walk. The prize is a real one, as once kissed, the stone bestows the gift of eloquence. Source: Blarney Castle's Web site

The plaque bears the following inscription:

The above stone was uncovered by a group of engineers near here on March 7, 1939. Due to appearance it was perceived to have an unusual property. On careful investigation it was found to be identical with a piece of the original Blarney Stone which disappeared in from Blarney Castle near Dublin, Ireland in 1659. This piece of the original Blarney Stone bestows on all who kiss it the gift of eloquent speech.