Erin Go Braugh: Generations of Storytelling Through Music and Dance

Discover the great tradition of music and dance, a form of oral history for Irish culture and identity passed down through the ages. 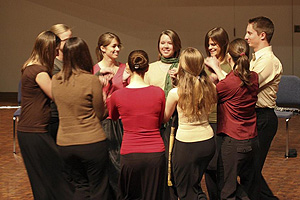 Christopher Smith, associate professor of musicology and director of the Texas Tech Celtic ensemble, says Irish music and dance have been around for centuries because of its rich tradition.

“Passing down music to younger generations is much like passing down an heirloom,” Smith said. “People from across the Celtic world have been collecting songs and tunes and sharing them with others for centuries.”

Though commonly applied to music, the term “Celtic” represents a family of languages. Linguistically there are seven Celtic nations including Ireland, Scotland, Wales, Brittany, Cornwall, Galicia and the Isle of Man. The music of these nations shares a certain characteristic “accent” – song types, dance steps and instruments like the fiddle, the timber flute and the bagpipes appear throughout the Celtic traditions.

For the Irish, music and dancing have always gone together. Many types of dancing have been known and enjoyed throughout history, but the two types associated most specifically with Ireland are set-dancing and step-dancing. Set-dancing, an ancestor of American contra- and square-dance, usually includes four couples who dance in figures. Solo step-dancing, such as that seen in "Riverdance" and "Lord of the Dance," is associated with traveling dancing masters, whose expert dances, often performed on a rain barrel or a door laid on the ground, served as a kind of advertisement for their teaching.

Smith says Celtic dance is a very important part of the Irish tradition.

“For centuries, writers traveling in Ireland have commented that the people there love to dance,” he says. “This is still true. Even in today’s very different world, the Irish love to dance to the music.”

In honor of St. Patrick’s Day, people everywhere are invited to rediscover the great traditions of Irish songs and tunes, music and dance.

Find more information about participating in Irish music and dancing in Lubbock via the Caprock Celtic Association, the Texas Tech Set Dancers or the Texas Tech Vernacular Music Center. See more on YouTube.

Listen  to the Texas Tech Celtic ensemble and Roger Landes perform "The Hole in the Harper's Head."